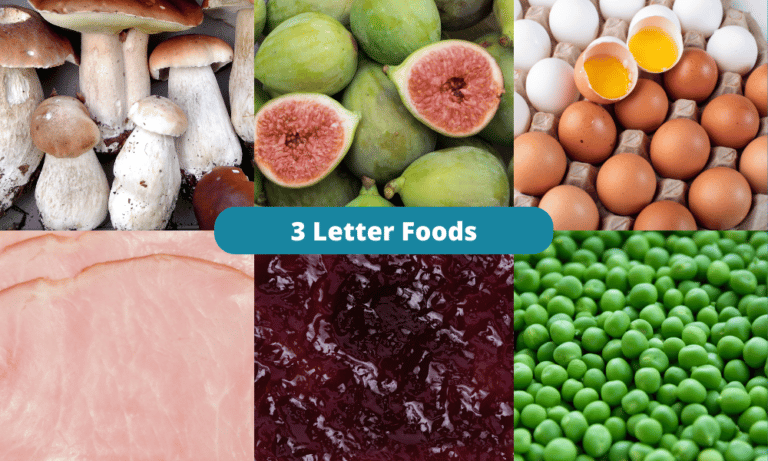 We can all reel off hundreds of foods but trying to come up with foods with just 3 letters can be challenging. They are few and far between. Fortunately, we’ve put together our list of 3 letter foods, all 18 of them!

Many lists on the internet will include items that really shouldn’t be included on a list of foods – things like ice, tea and gin. Instead, this list contains 18 actual foods:

Ahi tuna is the Hawaiian name for the more commonly known tuna species, yellowfin and bigeye. Of course, you can get different grades of ahi, making some suitable for serving raw as sashimi.

Most tuna varieties are pretty expensive when compared to other fish and meat products. However, ahi is far from the most expensive tuna. Bluefin tuna tends to be significantly more pricey.

Unlike the first food on this list, bun is a blanket term for various dough-based food items. Your initial thought will probably be a burger bun or a hot dog bun. But, the number of bun varieties is extensive.

There are bao buns, sticky buns, cinnamon buns, saffron buns, hot cross buns and more… Wikipedia even have a dedicated list of buns.

If you’re a fan of mushrooms, then chances are you’ve heard of a cep mushroom. They are the pinnacle of mushrooms. Forget button or chestnut mushrooms, a cep packs intense earthy mushroom flavour, and that flavour comes at a price!

A portion of cep will cost you 5 to 10 times more than the equivalent weight in chestnut mushrooms.

Are Cep and Porcini the Same?

Yes, cep and porcini are the same. This particular mushroom is known as cep in France and porcini in Italy. Elsewhere, the two terms are used interchangeably.

Even if you don’t eat fish, you’ll have heard of cod. It’s the go-to option in fish and chip shops, makes its way into fish cakes and is the perfect base for a fish pie. It’s a mild, inoffensive, firm white fish.

Unfortunately, cod isn’t the most sustainable fish to eat. Arctic char and European hake are far better choices. For an up-to-date list of which fish you should (and shouldn’t) be eating, check out this list from MCSUK.

Cos is one of the most popular lettuce varieties across the globe. It’s bright, crunchy and large leaves are a great addition to burgers, an easy way to prep a green salad and the perfect vessel to create lettuce cups.

Are Cos and Romaine Lettuce the Same?

Dal (or dahl) is a bit confusing because this one 3-letter word can mean two things, an ingredient and a dish. The dal ingredient relates to dried lentils, split peas or beans.

The dal dish is made when these ingredients are slowly cooked with plenty of spices and seasoning. The resultant dish is a thick, soup-like dish that’s perfect for scooping up with freshly made naan bread.

You might not think it, but eel is eaten globally, in different forms. You get unadon in Japan, jellied eels in England, smoked eel in Germany, jangeo-gui in South Korea and sauteed elvers in Spain.

What is the Jelly in Jellied Eels Made Of?

The jelly in jellied eels is gelatin from the eels themselves. When they are boiled, they release gelatin, which then sets into the jelly you may know on jellied eels.

If you were asked to think of a 3 letter food instantly then, chances are, egg would be the first thing that pops into your head. After all, it is claimed that the average person in the world consumes 161 eggs per year.

Eggs are so common that they make a second appearance on this list at number 17, and for good reason!

From one of the most common foods on this list to possibly one of the more unusual, elk is not something you’re going to pop down to your local supermarket to pick up but is something you might find at an artisan food market or a fancy restaurant.

Unsurprisingly, it has a game-like flavour that’s not dissimilar to venison. It will usually be dried or cured and eaten as a jerky-like food.

Several countries will eat elk in different quantities. Generally, it is countries where elk are native. This includes Finland, the United States, Canada and New Zealand.

3 letter fruits are scarce. In fact, fig is the only fruit that makes it onto this list of 3 letter foods.

Did you know, however, that a fig is technically not a fruit but a flower? It is an inverted flower which is why they rely on wasps crawling inside to pollinate them.

Whether you cook a whole ham joint to serve as a roast dinner, add a few pieces between two slices of bread or cure it and plate it up on a charcuterie board, there’s no denying its worldwide appeal and diversity.

Strawberry, raspberry, apricot or plum. On toast, in sandwiches, stirred into rice pudding or spread over cakes. It’s jam, of course!

You might not think you’ve heard of lox, but ultimately, it’s another name for a type of smoked salmon, commonly served in bagels.

Although it is often associated with Jewish cuisine, lox is thought to originate in Scandinavia, where fishermen cured salmon to preserve it for their long fishing trips.

What is the Difference Between Lox and Gravlax?

The difference between lox and gravlax is what they are cured in. Lox is cured mainly in salt, whereas gravlax is cured in a combination of salt, sugar and herbs. This is why lox has a far saltier flavour.

Ogi is possibly the most unusual food on this list and one you may not have heard of, unless you’re a Nigerian cuisine aficionado, of course!

Ogi is a basic, Nigerian breakfast dish made with three types of fermented corn (white corn, yellow corn and guinea corn). It is often served by street vendors and kept fairly plain.

Even the most reluctant vegetable eater would struggle to hate the humble pea.

Bright green and packed full of sweetness and goodness, peas are a staple vegetable across the globe… Especially in the UK, where the average person consumes 9,000 peas a year!

Like bun at number 2, pie is another blanket term for a range of dishes that can be found across the globe, in both sweet and savoury forms.

You get pork pie in the UK, pizza pie in Chicago, kalakukko in Finland, Tourtière in Canada, Pumpkin pie in the US, shoofly pie in Holland and sugar pie in Belgium.

Here is the second mention of egg on the list, in the form of roe. Roe is the term used for all fish eggs. Although many confuse caviar for roe, caviar is simply the roe from sturgeon fish. All caviar is roe, but not all roe is caviar.

Although less common in western Europe, yams are a widely consumed vegetable similar to sweet potato. It is a starchy vegetable that can be mashed, boiled, fried or roasted.