Both Caraway and Cumin Seeds are Used to Add Warmth and Spice... So, are they the Same? 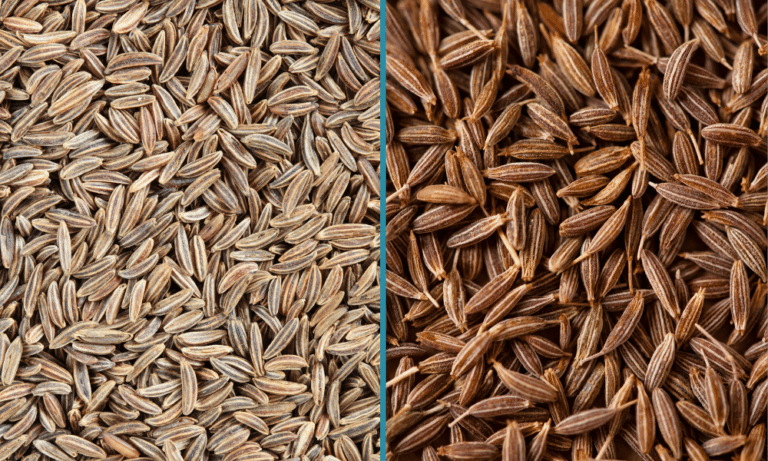 There are some spices and herbs that are must haves in any kitchen. Parsley, paprika, cinnamon – every household will have something to make their meals taste delicious. But what about more unique ingredients?

Caraway seeds and cumin are each spicy in their own way, which is their most significant distinction. Caraway seeds’ most prominent flavour is liquorice, so their spice is sweeter and warmer. The spice of cumin is much more impactful, leaning towards a peppery kick.

What are Caraway Seeds?

What you may not know about caraway seeds is that they are technically dried fruit, harvested from (unsurprisingly), the caraway plant. However, because of their slightly curved, nutty look once dried, the dried caraway fruit are mistaken for seeds.

Caraway seeds can be used either ground or whole. Considering that they are a spice commonly associated with breads or soups, most cook with whole caraway seeds to add texture to their dish.

However, they can also pack a punch when ground to make them easier to incorporate into meat marinades or vegetable seasonings.

The overall taste of caraway seeds can best be described as mild. Its citrusy sweetness and liquorice flavours are subtle enough to leave the taste buds tingling without being overwhelming.

There is also a predominant earthy flavour to caraway seeds. When the seeds are used raw, they develop a slight spiciness the more they are chewed.

Caraway seeds that have been slightly roasted or cooked before being added to a dish unlock the strong anise aroma and determine the spice’s liquorice tones. This is why some argue that caraway seeds are spicy, though the spice is better described as warmth.

When Should you Use Caraway Seeds?

You can sprinkle caraway seeds on your dish if you don’t mind the more subtle flavours. However, if you are cooking caraway seeds, then do not add them too early in your cooking process. Cooking the seeds for more than 15-20 minutes can make them lose their flavour.

What are Cumin Seeds?

Cumin is one of those spices that seems to have been around forever, but not many people in Western cuisines know how to use it properly.

The earliest uses of the cumin spice can be traced back to Ancient Egypt, but in modern times it is commonly associated with Mexican, African, and Middle Eastern cuisine and in curries.

This is because of the natural earthy flavours that those cuisines centre in their dishes.

Cumin is an intensely earthy spice with the perfect amount of citrus notes to prevent the hearty taste from becoming too rich. Undercutting both the earthy and citrusy flavours is a warmth similar to the spice of black pepper, but much more evident.

With such deep flavours, cumin can withstand a lot of dishes without falling flat. It is a favourite for vegetable dishes, helping to enhance the slight sweetness of root vegetables.

Likewise, it can be paired with any roast or grilled meat, adding a little sweetness to the complex base of the meat.

Cumin can be bought and used as a whole seed. However, it is far more commonly bought ground as a powder to disperse its intense flavours throughout your dish better.

What Goes Well With Cumin?

Using cumin as the prominent flavour for your dish would be overwhelming. Pairing the spice with other sweeter spices, such as cinnamon or ginger, can stop the earthy tastes from becoming too much.

However, just because caraway seeds and cumin have similar base flavours does not mean that they are the same spice completely. Here are some differences to keep in mind when using them in your kitchen:

Do You Prefer Caraway Seeds or Cumin?

Have more questions about caraway seeds, cumin seeds and how they are similar? Then these FAQs might help out:

Can You Substitute Caraway Seeds for Cumin Seeds?

Yes, you can swap these seeds. You’ll get a slightly different flavour, but both seeds, when toasted and ground, will add a warm, spicy undertone to your dishes.

Are Cumin Seeds and Caraway Seeds the Same?

No, they are completely different ingredients. They look fairly similar and have similar flavours, so they are often mistaken for one another.

Paneer vs Mozzarella: What’s the Difference?

How to Freeze Curry Leaves

Why Does My Curry Taste Bland?