Karaage vs Katsu: What’s the Difference?

We Reveal the Similarities and Differences Between Karaage and Katsu 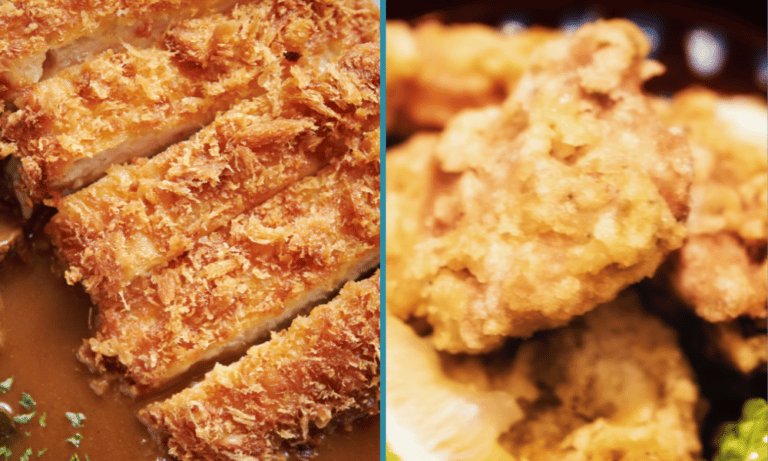 There are so many delicious dishes to come out of Japan that have gained popularity in the West in recent years. Mention your craving for chicken katsu to anyone in London and they will be able to tell you where to get some.

But there are some Japanese dishes that, while not a secret, haven’t taken off outside of Japan as quickly as other dishes.

The next time you are ordering in a Japanese restaurant, maybe take a moment to consider a slight variation of your favourite dish. Try karaage instead of katsu. They aren’t that different after all, right?

Karaage is often considered a more flavourful version of katsu. Chicken, pork or an array of other meats and fish are marinated in a basic soy sauce base mix before being deep fried. Katsu cooking techniques don’t require any marinating, relying on the meat itself for all the dish’s flavour.

Karaage is a relatively new Japanese cooking technique introduced to Japan by the Chinese in the 1920s. However, nowadays, karaage dishes can be found sold all over Japan, from high-end restaurants to typical convenience stores.

Different regions in Japan will have their own take on karaage, though they all derive from a basic cooking technique.

Likewise, karaage can be implemented on a range of fish and meats, but it is most commonly associated with chicken, hence why karaage is often called Japanese fried chicken.

The dish’s flavour comes from the marinating process when meat or fish is being prepped. When the protein is full of flavour, it is covered in flour and deep fried.

Most karaage marinades are simple with a soy sauce base, sake, ginger, and/or garlic to create a slightly sweet, umami-packed flavour. The dredging flour is wheat, or sometimes potato starch, which provides a light but crispy coating once fried.

That being said, karaage dishes are easily customizable. You can change the marinade better to suit your preferred tastes or protein choice. So long as you keep the primary flavour palate of the marinade, you can get as creative as you want.

How Do You Serve Karaage?

As chicken is the go-to protein for karaage, most karaage dishes are served with a bit of lemon and kewpie mayo. The karaage itself is the star of the dish, so additional condiments are kept to a minimum.

The term katsu refers explicitly to the breaded piece of meat that comes with the addition of the curry. That is why you can order a katsu as both a main and side dish in pretty much every Japanese restaurant.

When eaten without the curry, the katsu may be served on rice or with tonkatsu sauce.

Katsu is Japanese for cutlet, as in a cutlet of meat. Chicken breast is the preferred meat of choice when making katsu as it is easy to keep the meat succulent and juicy when deep fried.

However, pork and seafood are also popular katsu proteins.

There is very little flavouring that goes into the katsu making process. The cutlet is dipped into lightly seasoned flour, egg, and then panko crumbs before being deep-fried in neutral oil.

As such, the prominent flavour of katsu entirely relies on the natural flavour of the meat used. All that the process of cooking katsu style does is add a perfect crunchiness when fried without ruining the juicy cutlet.

Because katsu is a cooking method, it can be used for a range of meats, from chicken to pork as well as some vegetables. However, it has become most closely associated with chicken.

Similarities Between Karaage and Katsu

When you eat at a Japanese restaurant, you will probably find the menu descriptions of karaage and katsu to be almost identical because the dishes themselves have such similarities:

Differences Between Karaage and Katsu

For all their similarities, karaage and katsu are their own cooking techniques in their own right. Their development through the years has led to some key differences that clearly separate a karaage dish from a katsu dish:

Karaage vs Katsu: Which Wins?

If you had to pick one to eat for the rest of your life, which would you opt for? Would you pick the common katsu or the more interesting karaage? It’s time to pick, karaage vs katsu:

Do You Prefer Karaage or Katsu

Got further questions about karaage and katsu? Then these common questions and answers might be useful:

What Does Karaage Mean in Japanese?

Karaage isn’t actually a word in Japanese. Instead, it is made up from two words. Kara, meaning Chinese and Age, meaning fried. Karaage, therefore, means fried Chinese style.

What Does Katsu Mean in Japanese?

Katsu comes from the world for cutlet as this is usually the cut of meat that is then fried to product a katsu dish.

How to Reheat Takoyaki