We Reveal What Makes Muenster and Mozzarella Different (And Similar) 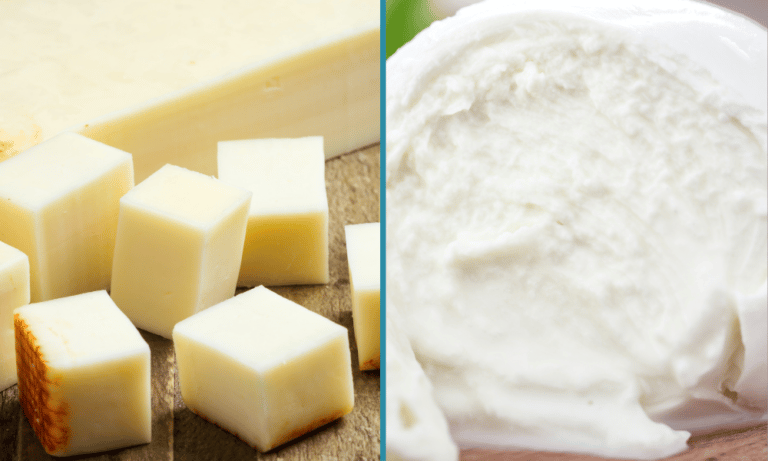 Whether you are searching for that picture-perfect cheese pull or simply aren’t a fan of intense cheeses, muenster and mozzarella are easily accessible cheeses for anyone to enjoy.

Muenster and mozzarella both provide the perfect stringy consistency once melted, but muenster is considered a savoury cheese, while mozzarella is much better suited for sweeter dishes.

Cheese enthusiasts will notice how similar muenster is spelt to the French Munster cheese. It is believed that muenster is the American take on Munster – specifically wash-rind Munster – which was introduced to America by German immigrants.

As such, muenster is a very American-washed take on its European cousin.

Its flavour has been diluted to a point near blandness. It compares more to any standard American cheese rather than Munster. Its mildness is achieved by limiting the cheese’s ageing to 7 weeks at most.

Muenster uses a base of pasteurized cow’s milk. A little annatto is used in the rind, turning it orange and providing the cheese with a much-needed mild nuttiness.

Most muenster manufacturers will season their cheese, giving it an untypical salty kick. Though again, this doesn’t prevent muenster from being extremely mild.

The main appeal of muenster is its meltability. Because it endures minimal ageing, muenster is very soft, easily melting with little heat. It is most often used when you want that perfect string-pull in pasta dishes or on top of pizzas.

The only difference between a muenster’s centre and its rind is the use of annatto, which is delicious and entirely edible. Annatto is also used in orange cheddar cheese and many other orange cheese varieties.

Mozzarella was originally only made in the south of Italy but is now made all over Italy. Buffalo milk is used to make fresh mozzarella using the traditional Italian cheese making technique of pasta filata.

The buffalo milk is heated to separate the curds and whey. These curds are left to sit in hot water for a few hours and then are drained and kneaded or pulled like bread.

Such a technique gives mozzarella its signature elasticity. It only takes a little bit of heat for the mozzarella to start melting and produce the picture-perfect string cheese.

That is why mozzarella is so popular; it requires little effort to cook with and can make any meal look delicious.

Due to the diet of buffalo, fresh mozzarella cheese has a very high moisture content. It is typically served within a few hours of being made to stop that moisture from ruining the cheese over time.

With no time to age, mozzarella cheese has little to no taste. It is mainly described as a milky cheese with a slight sweetness that is a natural flavour produced by the buffalo milk base.

Is Dried Mozzarella Any Good?

Mozzarella that has been dried or had its moisture content reduced is not as fresh tasting as other mozzarellas. However, it is usually more affordable, lasting much longer in the fridge and still tasting delicious.

Similarities Between Muenster and Mozzarella

There are some chefs who like to use muenster and mozzarella in the same dishes, either next to each other or interchangeably. This is because of their shared cheesy characteristics, such as:

Differences Between Muenster and Mozzarella

Regardless of how similar some cheeses may be, each cheese has its own characteristics that separate it from its closest relation. So, despite their similarities, muenster and mozzarella have even more differences:

Muenster vs Mozzarella: Which Wins?

You’re only allowed either muenster or mozzarella, so which one do you pick? It’s muenster vs mozzarella, but who wins?

Do You Prefer Muenster or Mozzarella

Do you still have questions about muenster and mozzarella? Then these FAQs might be of use:

Can You Substitute Muenster for Mozzarella?

Is Muenster French or German?

Munster cheese is French but muenster is neither French nor German. Instead, it is an American creation.

How to Microwave Mac and Cheese

Can You Eat Mozzarella Raw?