Can You Eat Mozzarella Raw?

Is Eating Raw Mozzarella Worthwhile? How Should You Do It? 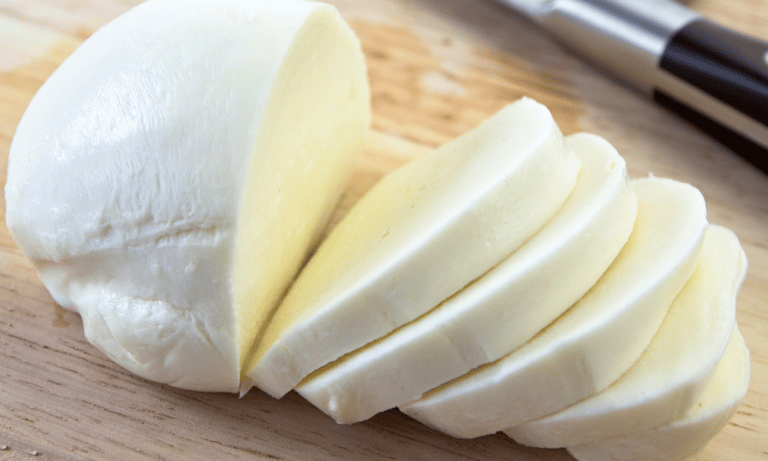 One of the most popular cheeses, especially in Italian cuisine, is mozzarella. You will often find slices of mozzarella on pizzas, in paninis or folded into a cheese sauce. When cooked, mozzarella goes beautifully melty and often provides that very satisfying cheese pull when stretched.

Given that mozzarella can be used in so many ways when it is cooked, it poses the question of whether you can also eat it raw?

You can mozzarella raw and it is perfectly safe to do so. In fact, mozzarella is used raw in some of the most popular mozzarella-based dishes such as a Caprese salad.

Mozzarella, whether cooked or uncooked, has a delicious creamy taste that is also very mild in flavour. The taste may vary slightly based on whether the mozzarella has been made with cow’s milk or buffalo’s milk; the latter has a slightly richer flavour.

Texturally, raw mozzarella is slightly more rubbery compared to when it is cooked.

How to Eat Raw Mozzarella

There are lots of recipes that ask for you to cook mozzarella and make it melt over whatever pasta, bread or other ingredient forms the base of the dish. However, there are also a number of dishes that already include raw mozzarella as a key ingredient:

Caprese salad is a simple, classic Italian salad, made of sliced fresh mozzarella, tomatoes, and sweet basil, seasoned with salt, and olive oil.

The tomatoes and mozzarella are layered on top of each other and then decoratively arranged on a plate, drizzled with olive oil or even balsamic vinegar.

It may sound strange at first, but raw mozzarella actually pairs really well with fruit. You may often see starters where mozzarella is paired with fruits such as figs, melon, and even mango.

Given that mozzarella has such a milky taste, it adds a lovely complimentary flavour to the fruit. If you want to enhance things a little more, then add a salty element to the dish too such as sliced prosciutto or bresaola.

Mozzarella comes in various forms, but one of the most popular forms for use in salads is bocconcini.

These small balls of mozzarella can be added to cold salads, pasta salads or rice salads to add a creamy, rich element to the dish. It pairs particularly well with pesto-based salads.

We often hear that eating cheese is bad for you, and it is true that if you were to eat cheese every day, it wouldn’t be too great for your health. However, there are some health benefits to eating mozzarella, so in moderation, it may provide you with some added nutrition.

Mozzarella is rich in biotin, which is also referred to as Vitamin B7. This is a water-soluble nutrient, meaning that you can satisfy your immediate nutritional needs rather than storing them in the body. Some pregnant women eat this cheese to cope with a possible biotin deficiency.

This particular cheese is also rich in potassium and zinc, which can help with lowering blood pressure, increase white cell count and, in men, can aid weight loss. Mozzarella is also lower in calories than most cheeses.

Finally, mozzarella is rich in Riboflavin or Vitamin B2, which is a vitamin that should be taken daily to help the body fight multiple ailments, including migraines and anaemia. The antioxidants contained in mozzarella can also help promote overall health.

Although there are some health benefits to eating mozzarella, we cannot classify this as a healthy food as the fat and salt content is extremely high. Eating too many foods high in fat can lead to conditions like cardiovascular disease, high blood pressure and high cholesterol.

As mozzarella is often made with cow’s milk, sometimes buffalo milk, there is an increased risk of ingesting antibiotics, dioxins and hormones. This is linked to certain types of cancer and some have gone on to develop antibiotic resistance from consuming animal milk.

If you are pregnant, you also need to be aware of how the mozzarella was made. Mozzarella that has been made from pasteurized milk is totally fine to eat. If the milk was unpasteurized, i.e. raw milk, then it is not safe to consume.

Should You Eat Raw Mozzarella?

Eating raw mozzarella is completely fine! It can add a great textural and flavour profile to a salad, whether that be made from fruit or vegetables. It is a very versatile cheese that is mild in flavour so is often suitable for everyone, whether they are a cheese fan or not.

You need to be aware that it won’t have the same melty, stringy texture you would get if it were cooked, and that eating cheese often isn’t great for your health but, in moderation, raw mozzarella is a great cheese to have.

If you’ve got other specific questions about eating raw mozzarella then these might help:

Can You Eat Raw Mozzarella When Pregnant?

As with many dairy products, it depends on how it was processed. It must not have been made with raw milk. You can get more information on whether it’s safe or not here.

Can You Eat Raw Buffala Mozzarella?

Yes! In fact, buffala mozzarella has such a creamy texture and delicate flavour that it would be a bad idea to cook it. Instead, each a small slice on a piece of bread with some thinly prepared cured meat and a drizzle of oil.

Olivia Sheppard
Olivia is a 27-year-old writer based in Essex, UK, but has lived all over the world including Australia and Eastern Africa. She has always had a passion for writing and has recently combined this with her love of food by starting her own food blog and partnering with others to support them with writing content on food and nutrition.
January 30, 2023

What to Serve with Gnocchi

How to Freeze Basil