Can You Eat Chorizo Raw?

Is Eating Raw Chorizo Safe? Will It Make You Ill? 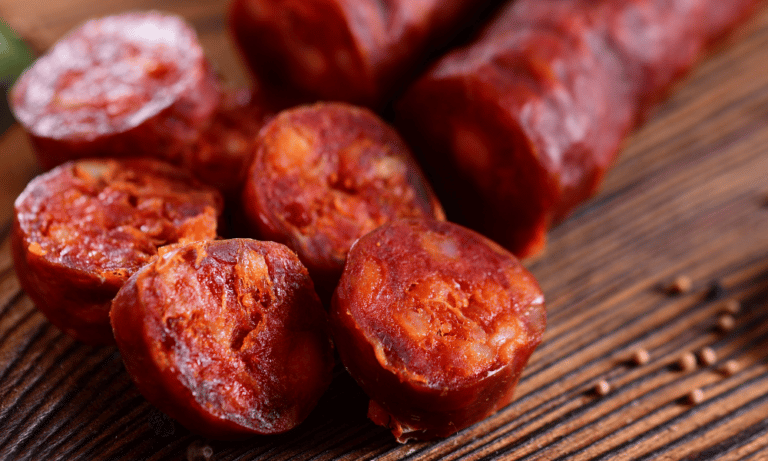 Chorizo is a versatile type of sausage that can be used in salads, on pizzas, in Spanish-style stewed or even cooked and eaten on its own. Commonly found in both Spanish and Mexican food, chorizo is a pork sausage that is lightly spiced and seasoned with chilli, pepper and paprika to give it a distinctive flavour.

There is a slight difference between Spanish and Mexican chorizo which does make them slightly different to use. With this in mind, you might be wondering can you eat chorizo raw?

You cannot eat chorizo raw. There are no situations where this pork sausage should be eaten raw. This doesn’t mean you can’t eat it cold which is a common way to buy Spanish chorizo.

Let’s explain a little further about whether you can eat chorizo raw:

The main difference between Spanish and Mexican chorizo is in how it’s made and how you are likely to buy it. Spanish chorizo is the type you might be most familiar with and is usually found in the deli section.

These are smoked and are usually cooked before you buy them. This type of chorizo can be eaten as it is bought from the shop or delicatessen. Just make sure that it is cooked and is suitable for eating right out of the packet before you eat it.

Mexican chorizo is made with fresh pork and not smoked, so if you buy raw chorizo, then you definitely must cook it before you eat it.

Fortunately, it’s easy to cook. You can fry it up, pop it into the oven or add it to your recipes and hotpots as you cook. If you are adding it to salads or as a pizza topping, then you should cook it first before adding it to your pizza.

The dangers of eating chorizo raw are the same reasons you shouldn’t eat raw pork, and you should be careful with reheated pork.

Pork can contain harmful bacteria and contains this bacteria while it is in its raw state. These bacteria grow best in raw meat, and it even grows in cooked meat when that meat is left at room temperature.

The result of eating this is food poisoning which, if it’s serious enough, can lead to serious illness. In very severe cases, it can be fatal.

The great news is that although raw pork shouldn’t be eaten. As long as you handle and cook your chorizo and any type of pork well then, you can eat it without suffering any side effects.

Side Effects of Eating Chorizo Raw

Your side effects will depend on a few different things. It will depend on how strong your stomach and immune system are, what parasites, bacteria, or foodborne illnesses the raw pork chorizo contains and whether these then cause you to be sick.

Mild side effects may be a stomach ache, diarrhoea or constipation. You may feel sick or even vomit. Other side effects can include headaches, fevers and chills. You can even experience swelling, achy joints and general flu-like feelings and feelings of being unwell.

In severe cases, you can have any of the symptoms already mentioned and difficulty breathing, have difficulties with your coordination and experience heart palpitations and problems.

The myriad of symptoms you can have from raw chorizo will be different from person to person because it can depend on which bacteria and diseases you have ingested.

If you are lucky, you won’t get any of these side effects at all. If you end up ill, then in most cases, it will be a short term food poisoning type of illness, but you can contract other illnesses that last for weeks or months and will require medical help.

What Do You Do If You Have Eaten Raw Chorizo?

If you eat raw chorizo, then you may not need to panic straight away. There is a chance you suffer very mild side effects and won’t require medical help. However, you do need to carefully monitor your health over the following few days after eating the raw chorizo.

If you are experiencing any serious side effects such as difficulty breathing, heart problems or severe vomiting and diarrhoea, then you should either contact a doctor or call emergency services. If in doubt, ask for help and advice from your doctor.

Extra care should be taken if you are either pregnant or breastfeeding, and you should seek medical advice immediately. You could pass on any of these diseases or bacteria to your baby, and a doctor will be able to advise you on what to do next.

You need to be careful if you have any long term illnesses, especially if these affect your immune system. So if you are immuno-suppressed, then seek medical advice from a doctor immediately after being aware you have eaten raw pork.

If you’ve got other specific questions about eating chorizo raw then these might help:

Can You Eat Chorizo Skin?

The skin of cured, ready-to-eat chorizo can be tough and unenjoyable to eat. It’s unlikely to do any harm, but it won’t be nice to eat, so take the time to remove it. You need to cut a small slit down the length of the chorizo, then peel the skin off carefully – if you’re lucky, it will come off in one piece.

Spanish chorizo is available both cooked entirely and cured. Generally speaking, all Spanish chorizo can be eaten from the packet as it has either been cooked or cured. It’s worth checking the back of the packaging, however.

Can You Eat Diced Chorizo Raw?

No, you cannot eat chorizo raw in any form. It needs to have either been cooked or cured. You can determine if this is the case from the label on the packet.

Do You Have to Cook Chorizo?

Yes, if the chorizo is completely raw, then it needs to be cooked. The exception to this is if it has been bought cured then this does not need to be cooked further.

How to Reheat McDonald’s

How to Reheat Chilli Con Carne

How to Reheat Kidney Beans