Can You Eat Broad Beans Raw?

Is Eating Raw Broad Beans Worth Trying or Not? 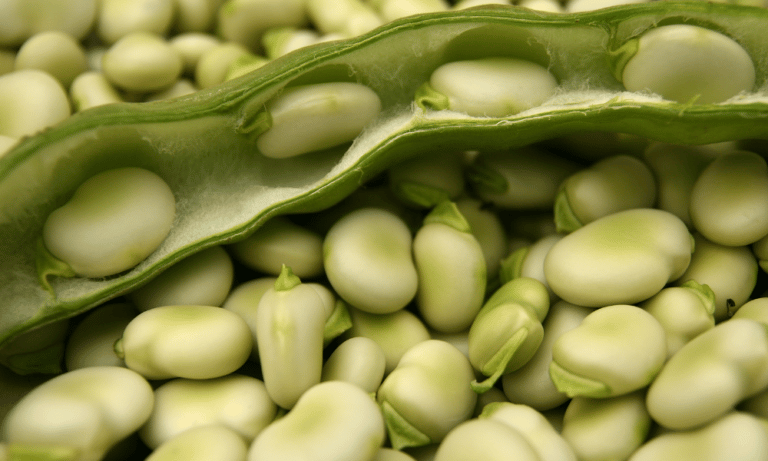 Broad beans are the type of veggie that people seem to either love or hate. Some love the bitterness of these beans and others avoid them at all costs! Even when cooked these beans can still seem bitter and difficult to eat. But you might be wondering are they better raw, can you eat broad beans raw?

You can eat broad beans raw. However, there is a caveat to this. You should only really try and eat the young shoots and beans raw. After they start to grow they become too difficult to eat.

Broad beans have a distinctive taste whether they are cooked or raw. When they are fully grown they can be fairly bitter in taste and have a slightly grainy texture when you bite into them.

When they are young you can eat them raw and they taste just as bitter and maintain this odd texture. If you are not a fan of cooked beans then it isn’t worth trying them raw!

If you do like this bitter taste, as many people do, then you can eat the young shoots and beans raw but just be careful as not everyone reacts well to them and some people can actually have an allergic reaction.

How to Eat Raw Broad Beans

If you really want to try these beans raw then here is an idea or two for you to try. When picking out the perfect beans to eat make sure you choose young beans that are a fresh green colour and have no blemishes.

The bitter taste of these beans can add some interesting depth of flavour to a salad. Make your salad as usual and pop a few young beans and shoots into the mix. Give the salad a mix and then serve. Easy and no one will know where that interesting taste comes from!

Instead of using chickpeas to make hummus, try replacing them with broad beans. You could remove half of the chickpeas if you don’t want the flavour to be overly veggie.

You can then use this raw broad bean hummus spread over toasted bread or for dipping other vegetables into.

If you want to add another texture to a slaw then adding in whole, small broad beans or sliced larger ones is a great way to achieve this while adding another flavour and colour.

You could even slice them thinly using a mandoline if you want to mask their existence whilst benefiting from their nutritional goodness.

Broad beans are a good source of many vitamins, minerals and nutrients. If you are looking for a portion of a good, all-round food that includes vitamins A, C and potassium then you can’t go too far wrong than by eating broad beans.

However, you don’t get a much higher benefit from eating raw beans as you would if they were cooked.

The cooking process may reduce the number of nutrients in the beans but they won’t lose too much so this isn’t something to worry about. If you like raw broad beans then eat them, if you don’t then cook them instead. They will be just as good for you.

In rare cases, you might be allergic to broad beans. This is down to a disease called favism disease. This can cause a serious allergic reaction and can lead to blood disorders such as anaemia.

This is a hereditary disease so chances are you already know you have it and avoid broad beans already. It is worth being aware that this can be a problem for some people.

Should You Eat Broad Beans Raw?

Broad beans are a sustainable type of bean to farm and eat so there is no real reason you shouldn’t eat the beans. You do need to be careful when eating any beans raw because they can contain harmful bacteria that even washing may not get rid of.

We would recommend you eat raw broad beans only if you know what you are looking for in the bean and are confident the beans are safe. If in doubt cook them instead.

If you’ve got other specific questions about eating TEMPLATE then these might help:

What Happens If You Eat Broad Beans Raw?

Not a lot! Generally speaking, there are no issues with eating broad beans raw. Some people are allergic, however, but this is incredibly rare.

Do Broad Beans Need to Be Cooked?

No, broad beans do not need to be cooked. They can safely be eaten raw. However, if they are large and have had time to mature then it’s worth cooking as they can be quite tough.

Can You Eat the Pod of Broad Beans?

Although the pod of broad beans can be eaten, it’s not the most pleasant part of the vegetable to eat. It can be quite stringy and hard to chew through so it’s really not worth eating.

Yes, you can broad beans of any size raw. However, you may find that the larger they are, the tough and drier they become. This is why it’s better to stick to smaller, younger broad beans if you’re eating them raw.

Basil vs Mint: What’s the Difference?

How to Reheat Prawns