Can You Cook Chicken and Beef Together? 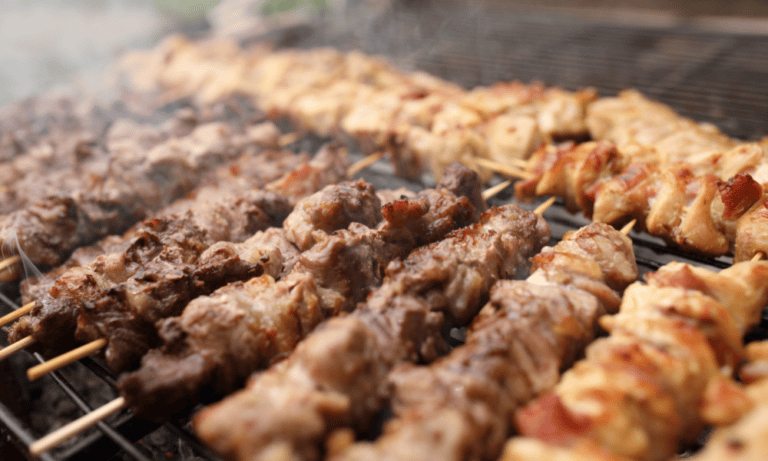 Chicken and beef are two of the most popular proteins amongst meat-eaters. If you want to enjoy both of these in one sitting, is it possible to cook chicken and beef together or should it be avoided?

Yes, it is safe to cook chicken and beef together. But it’s worth bearing in mind that both types of meat are likely to have different cooking times and needs so it’s still a good idea to cook them individually to have more control in the kitchen.

Is It Safe to Cook Chicken and Beef Together?

If we put aside practicality and taste and then focus solely on the safety aspect then, yes, you can cook chicken and beef together. It is perfectly safe to do so. Ultimately, if you cook anything enough then it will be safe to eat.

When cooking any meat items, it’s important that they are cooked properly to kill any potential bacteria. This is especially important with chicken and pork.

What Temperature Should Chicken Be Cooked To?

What Temperature Should Beef Be cooked To?

There is a little more flexibility with beef, especially if you have high-quality beef that can be cooked rare. 145F or 62C is the internal temperature you’d need to hit to cook beef to medium.

But, just because you can safely cook them together doesn’t necessarily mean you’ll want to – especially when the textural and taste outcome can be poor.

Can You Cook Chicken and Beef Together in the Oven?

Yes, you can cook chicken and beef in the oven simultaneously but we would avoid putting them in the same tray to avoid any major cross-contamination. Chances are, you’ll want to cook one cut for longer than the other so having them in individual trays makes it easier to remove one and not the other.

Can You Cook Chicken and Beef Together in a Pan?

Again, although it’s probably safe to do so, it’s not the best idea as trying to control two types of protein in one pan can be a challenge. The beef might need a quick sear at a high temperature before it’s ready but the chicken is more likely to need a lower heat for longer.

Instead, get two smaller pans out and cook each type of meat individually to give yourself more control.

Of course, if you have beef strips and diced chicken thighs and you know they’ll need exactly the same cooking time (in a stir-fry, for example) then feel free to use one pan. But only do so if you know they’ll cook at the same time.

Can You Cook Ground Chicken and Beef Together?

Yes, you can cook ground meat together in the form of meatballs or meatloaf. Because they are ground, they have roughly the same surface area. They’ll need to be cooked through to an internal temperature of 165F or 74C. Make sure you add an egg to the mix to keep them moist.

Can You Cook Chicken and Beef Together on the Grill?

If you’re a grill master and know exactly what you’re doing, then it’s actually easy to cook both chicken and beef together. You could even through pork and lamb into the mix!

The key is to ensure you have multiple temperature zones on your grill. You’ll need to have areas with scorching heat to cook beef cuts high and fast alongside areas with low heat to cook the meat through, such as chicken thighs.

Which Takes Longer to Cook, Chicken or Beef?

This will come down to the cut of the meat you’re using. A whole chicken is, obviously, going to take longer to cook than a minute steak. A piece of braising steak will take longer than a boneless chicken thigh.

Why You Shouldn’t Cook Them Together

Although it’s safe to do, there are a number of reasons why cooking these two types of meat together just isn’t worth it:

Instead, if you want to cook chicken and beef, grab two roasting tins and cook them individually in the oven, side-by-side. This won’t take much extra effort and will give you an opportunity to season them individually.

Cooking Chicken and Beef Together FAQs

If you’ve still got a question or two about cooked chicken and beef together then these FAQs might help you out:

Can You Cook Chicken and Steak Together?

Yes, chicken and steak can be cooked together if you pick the right cut of chicken. There’s no point trying to cook a whole chicken with a steak. But boneless chicken thighs and steak would cook in roughly the same time.

Can You Eat Chicken and Beef Together?

Of course! You can eat pretty much anything together. Chicken and beef work well as part of a meat platter, especially when cooked in the same way such as on the BBQ.

Do You Need Oil to Cook Bacon?