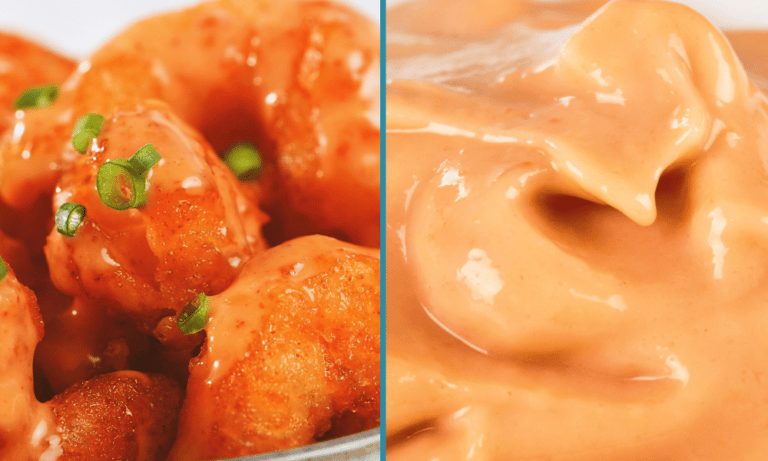 Bang bang sauce and yum yum sauce are both condiments popular in Asia. But are they the same sauces or completely different?

The main difference between bang bang sauce and yum yum sauce is that the spice level and, therefore, the flavour are different. This is because, although they’re both sauces, the ingredients are far from the same.

What is Bang Bang Sauce?

Bang Bang sauce is one of the most popular sauces served on or alongside many street foods, most famously Bang Bang Chicken.

Why Is It Called Bang Bang Sauce?

Bang Bang sauce is traditionally served on deep-fried chicken. The name Bang Bang comes from the noise the cleaver would make when street sellers cut the chicken to make the dish.

How Do You Use Bang Bang Sauce?

What is Yum Yum Sauce?

Yum Yum sauce is made of a combination of mayonnaise mixed with ketchup, vinegar, garlic, sugar and paprika. A range of foods can be dunked into the sauce – if you’re going to try anything dipped in it, give steak a go!

Why Is It Called Yum Yum Sauce?

The name Yum Yum sauce is far from imaginative… It’s simply because the sauce tastes so yummy!

Although both sauces have a remotely similar appearance and are both popular in Asia, the list of differences is extensive:

Although there is quite an extensive list of differences, Bang Bang and Yum Yum sauces are not entirely different. Here are some of the things they share:

Both sauces have spice, are used to dip foods into and are often served alongside Asian-inspired meals. But which is your favourite?

Do You Prefer Bang Bang Sauce or Yum Yum Sauce?

Do you still have questions about Bang Bang and Yum Yum sauces? Then these FAQs might help you out:

Bang Bang sauce works well at cutting through rich, greasy fried foods. This is why it’s so notable for being sold as Bang Bang chicken and Bang Bang cauliflower.

You can smother anything with Yum Yum sauce. It is most popularly served alongside steak, but it would work anywhere you normally use ketchup.

What Else Is Yum Yum Sauce Called?