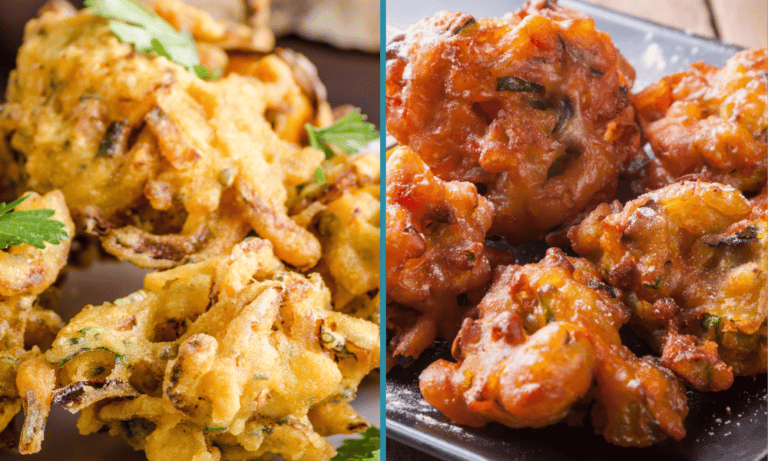 Love for Indian food has spread across the west like wildfire in the past few years. There are some dishes that westerners still struggle to eat despite how delicious they are, but any deep-fried side dish is an instant go-to choice for most.

What is an Onion Bhaji?

Whenever you order your favourite Indian takeaway or visit that delicious Indian restaurant, it is very likely that you will order a plate of onion bhajis as your go-to side dish.

Traditionally, onion bhajis are enjoyed as a starter. They are full of taste despite usually containing very few spices, even then, it is usually just turmeric, a little chilli, salt, and pepper. The result is a general spiciness.

Bhajis, as a concept, can have any kind of vegetable as its base, so long as it is finely chopped. The chopped veggies must then be covered in chickpea flour and a little water to create a thick batter ready to be deep-fried.

As there are minimal spices used in a bhaji, most of its flavour comes from the type of vegetable that is used. In the case of onion bhajis, the onion flavour is the prominent flavour and is clearly identifiable.

Onion is very easy to pair with a range of other flavours, though you will most often find onion bhajis served alongside brighter, tangy chutneys such as mango or lemon.

The specific flour used to make onion bhajis is a chick pea flour, better known as gram flour. This is a naturally gluten free flour, making onion bhajis gluten free. However, always double-check with the restaurant, as they may use different, cheaper flour.

What is an Onion Pakora?

Onion is not the ingredient that usually acts as the base for a pakora. In fact, in most cases, it is a kind of protein that is used, from a simple egg to a whole selection of meats (such as these chicken pakoras), shellfish or regular fish.

Of course, vegetables can be used too, with onion being one of the most popular choices.

There is no real limit to what spices can be used in an onion pakora. However, they are traditionally sold as a street food, so their typical herbs and spices are kept impactful but simple.

Turmeric and chilli are often used in onion pakoras alongside mint, ginger, and curry powder.

As for the batter itself, it is a fairly basic batter made by adding a little bit of water to some chickpea (aka gram) flour. An egg is also added to the batter before it is then refrigerated to ensure that the batter will be thick enough to form and hold a ball shape when fried.

What Should You Serve With Onion Pakoras?

Despite other spices working to make onion pakoras delicious, onion is still the prominent flavour of the dish. That is why onion pakoras work well alongside a range of light chutneys or are served as a snack.

At the end of the day, traditionally made onion bhaji and onion pakoras do have their differences, some more impactful than others on the overall eating experience:

From a non-Indian perspective, it can be easy to get onion bhajis and onion pakoras mixed up. Here are a few reasons why:

Now you know which is which, it’s time to decide which is better. Vote in our poll below to determine which comes out on top when its onion bhaji vs onion pakora:

Do You Prefer Bhajis or Pakoras?

When comparing onion bhaji vs onion pakora, do you have more questions? Then check these quick FAQS out:

What is Another Name for Onion Bhaji?

Onion bhajis will have a different name depending on the region you’re in. They can referred to as kanda bhajia, kanda bhaji and pyaz ke pakode.

Can You Make Onion Bhajis With Red Onions?

Of course! In fact, you can make bhajis with any vegetable you fancy. It’s just a name for deep-fried and battered vegetables. Red onions would work well in an onion bhaji but you may find them sweeter than usual.

What is Amchur Powder?