We Reveal the Similarities and Differences Between Parma Ham and Prosciutto 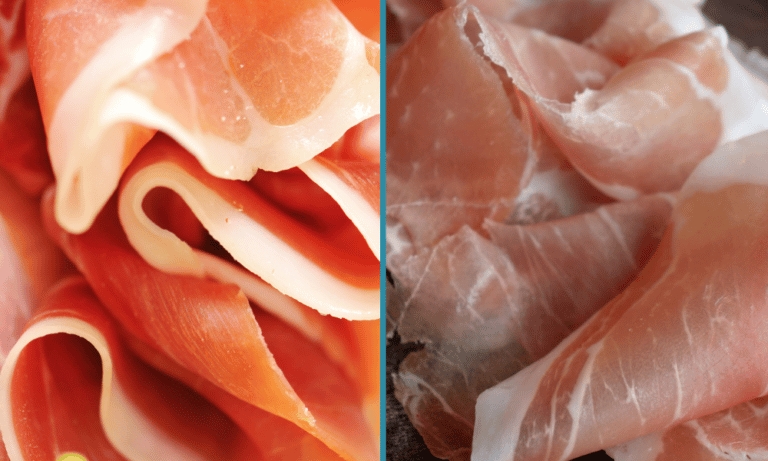 If you’re asked to name an Italian cured meat, you’d probably go for Parma ham or prosciutto, right? But how do they two meat products differ? Are there any similarities? Are they, in fact, the same thing? Let’s compare Parma ham vs prosciutto:

There are no differences between Parma ham and prosciutto. This is because prosciutto is the umbrella term for ham in Italy. Parma ham is simply a type of ham from the Parma region of Italy.

What is Parma Ham?

Parma ham is self-explanatory. It is a type of ham that comes from the Parma region of Italy. It is referred to as prosciutto di Parma in Italy. This is where it becomes clear that Parma ham is, simply, a type of prosciutto.

Parma ham is a deep pink with a large fat rind running down one side. This is why it is always cut really thin. The fat is full of flavour so you want to eat it but it can be tough and chewy if it is not cut thinly.

No, Parma ham is not cooked. Instead, it is cured using salt. It does not need to be cooked. It can be eaten straight from the packet. It can be crisped up in the oven to create shards or fried to create a crumb.

Some purists would argue that this takes away from the delicate, savoury and sweet flavours in the Parma ham though!

What Pigs are Used to Produce Parma Ham?

The pigs used to produce Parma ham come from the Parma region and are either Large Whites, Landraces or Durocs. They must come from an authorise abattoir to be certified as legit Parma di prosciutto.

Prosciutto is the blanket term for ham in Italy. You tend to get prosciutto cotto and prosciutto crudo. Cotto is cooked ham, much like the ham you’re used to having in a sandwich. Crudo is raw ham that has been cured, like Parma ham.

This depends. Prosciutto can be put into two categories, either crudo or cotto. Cotto is cooked prosciutto, much like a honey-roast ham you might be used to using in sandwiches. Crudo prosciutto is raw and cured ham.

As prosciutto is a term for ham, in general, there are various types of prosciutto to be aware of.

Differences Between Parma Ham and Prosciutto

There are few differences between Parma ham and other prosciutto, especially prosciutto crudo. They are all cured with salt.

There will be subtle differences in the flavour that experts and purists will be able to decipher. This is achieved through the feed that is given to the pigs. Parma ham pigs, for example, are fed the whey from Parmigiano-Reggiano cheese.

Similarities Between Parma Ham and Prosciutto

Of course, there are plenty of similarities between Parma ham and other prosciutto products. These similarities include the following:

Do you still have questions about how Parma ham and prosciutto are linked? Check these FAQs out:

Can You Substitute Prosciutto for Parma Ham?

Which Prosciutto Is Best?

If you ask an Italian which prosciutto is best, they will stay loyal to their region and pick their local ham. San Daniele, however, is one of the most desired prosciutto varieties.

Cornichons vs Gherkins: What’s the Difference?

Zeppole vs Beignet: What’s the Difference?