What to Serve with Panzanella

Here are 7 Dishes You Can Serve with Panzanella 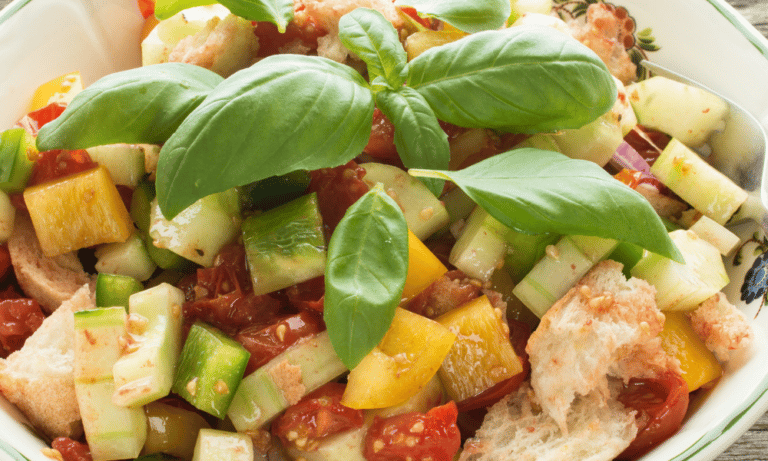 Panzanella is a salad made with tomatoes, cucumbers, stale bread and an acidic, vinegary dressing. As a salad, it’s rarely the centre dish of a meal. So, what can you serve with panzanella?

7 Dishes to Serve with Panzanella

Below we have listed our top 7 dishes to serve with panzanella. Some will turn panzanella into a full meal, others help panzanella to take centre stage:

The first option is to serve panzanella as part of an Italian-inspired picnic.

Therefore, the best thing to serve alongside it would be a pile of antipasti vegetables such as grilled peppers, aubergine, and jarred artichoke hearts and olives.

All you need to do is head down the jarred aisle of your local supermarket, grab a few, drain and serve. It couldn’t get much easier than this!

To continue with the picnic theme, panzanella can also be served with other traditional Italian salads. Caprese salad is both authentically Italian and really easy to knock together.

How to Make A Simple Caprese Salad

Making a caprese salad couldn’t be easier. Layer sliced beef tomatoes, mozzarella and individual basil leaves in a ring on a plate. Drizzle with balsamic vinegar and sprinkle over a pinch of salt and black pepper.

Other Italian salads would work just as well including shaved fennel salad, tuna and fagioli salad, rice salad or a simple tomato salad.

Panzanella works well at cutting through salty and fatty meats which is why a platter of cured meats would also work well with panzanella. Try to include a mix of meats including parma harm, salami, prosciutto, cotto and bresaola.

If you’re willing to veer away from Italian foods a little, then other Mediterranean cured meats would work well too, including chorizo, Iberico jamon, jamon de seron and serrano ham.

The other option is to grill a chicken breast, slice it into thin strips and then stir it through the panzanella. This will turn panzanella into the ultimate Mediterranean lunch or one-bowl dinner.

Most other grilled proteins will work too, including pork chops, steak, chicken thighs and lamb chops.

A pasta bake is unctuous and rich, loaded with salty cheese and sweet tomato pasta sauce. And that’s why a Panzanella works perfectly alongside pasta bake.

The acidic tomatoes and vinegar-soaked bread pieces cut through the richness of the pasta bake.

Panzanella works well as a dish to provide respite from rich, fatty foods. This is why it works particularly well alongside fried food such as breaded veal cutlets. You need acid and freshness to cut through the greasy nature of breaded veal; that’s precisely what panzanella delivers.

Any breaded meat or fish would work well here too, but veal is synonymous with Italian cuisine which is why we’ve specified it here.

Do you still have questions about what to serve alongside panzanella? Then these FAQs might help you out:

Why is it Called Panzanella?

Is Panzanella a Main Dish?

No, panzanella is rarely served as the main dish of a meal. Instead, it is usually used as a side dish or salad. The exception to this is during lunch when it can be the main dish.

What Dressing is Used on Panzanella?

The bread in panzanella soaks up the vinegary and acidic dressing which is why the dressing needs to be a 2:1 mix of olive oil and red wine or balsamic vinegar along with a pinch of salt and some diced shallots.

What to Serve with Pork Milanese

Can You Eat Green Tomatoes?

Is Kiwi a Citrus Fruit?