Do You Know Where the Name Cheesecake Comes From? 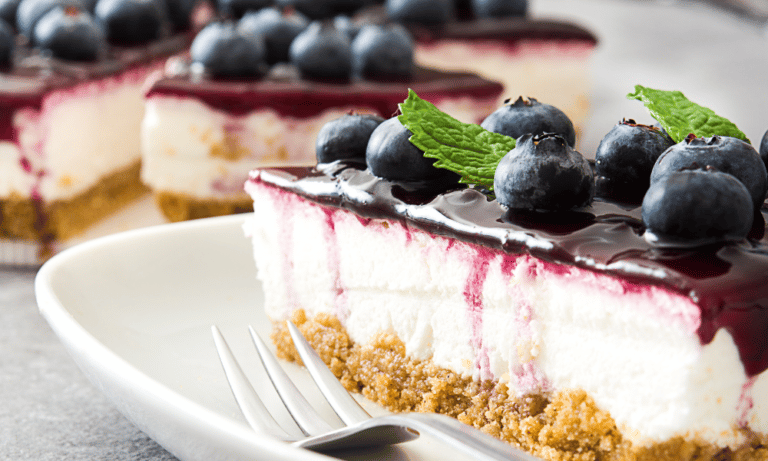 Have you ever wondered where certain dishes got their name? Cultures all over the world have their own take on the standard cheesecake, but where does the name cheesecake come from?

Cheesecake is called cheesecake simply because it includes cheese as its main ingredient. Precisely some kind of sweetened, soft cheese like cottage cheese or, more commonly, cream cheese.

The other question to ask, however, is why is cheesecake called cheesecake. Where does the cake part come from?

Unfortunately, there isn’t really an answer. A cheesecake is not a cake. Instead, it is a set custard. It is closer to a pie or flan. But cheesepie and cheeseflan simply do not sound right.

When Was Cheesecake Invented?

The origins of cheesecake in this form dates back to 1872, when cheese inventor William Lawrence tried to mimic Neufchâtel (a French type of soft cheese). Instead, he ended up with a very creamy cheese now known aptly as cream cheese.

Somewhere along the way, after Lawrence’s accidental invention, the modern cheesecake was invented.

However, this was not the first type of cheesecake to ever exist.

Some historical findings indicate that cheesecake was a Greek invention dating back to 776 B.C. Though the name had a more literal meaning then, using unsalted cheeses made with sheep or goat milk.

Honey was used to sweeten the cheese. In some cases, flour was used for structural stability. In others, a crust was used.

What Type Of Dessert Is Cheesecake?

From the name alone, you would think there would be no debate whether cheesecake is a cake or a type of pie. But ever since cheesecake was invented, there have been questions surrounding the classification of the sweet treat.

Some argue that baked cheesecake is a type of cake purely because it is made using a type of batter that is then baked.

Others argue that cheesecake is a pie as it often has a type of crust filled. In this case, filled with a sweet cheese and sugar mix.

That being said, recent arguments have named cheesecake a tart. It does not have a pastry crust or shell as usually expected of a pie, but it has a type of crust that is then filled.

Really, it doesn’t matter what type of sweet treat cheesecake is. Its traditional flavours are so malleable and customisable that you don’t need to worry about ruining what would typically be a pie or cake texture too much.

It is also worth noting that not only has cheesecake evolved substantially since its Greek origins. But there is also a whole range of takes on cheesecake found in every corner of the world.

Each type of cheesecake could be defined as various pies, cakes or tarts. Though so long as the cheesecake tastes good, you don’t need to worry about its classification.

Types Of Cheesecake From Around The World

The culinary world has come a long way since the times of the ancient Greeks.

There can be a cheesecake recipe of some form found in pretty much every culture and cuisine. Some depict the traditional recipe better than others.

Here are just a few cheesecakes that you should try making the next time you want a delicious dessert:

There is one cheesecake not listed above… Raffaele Ronca’s $5,000 cheesecake. It was made with water buffalo cheese, 200-year-old cognac and white truffles… Talk about decadent!

How Is New York Cheesecake Different To Regular Cheesecake?

The cheesecake we are more familiar with in the UK is a regular, no-bake cheesecake. This is the kind of cheesecake that uses a lot of cream cheese and doesn’t need baking.

However, in America and other parts of the world, cheesecake is a baked treat with more cream than cheese. New York cheesecake, in particular, also uses eggs which creates a creamy, cake-like batter.

New York cheesecake is more structurally sturdy than regular cheesecake as it has been baked.

However, regular cheesecake has a delicious buttery biscuit base and is the perfect sweet dessert on a hot summer’s day.

Do you still have questions about the origins of cheesecake and its name? Then check these FAQs out:

It is believed that Ancient Greek invented cheesecake over 4,000 years ago. Of course, the cheesecake they ate was nothing like what we know as cheesecake today but was a form of sweetened cheese.

Does Cheesecake Actually Have Cheese In It?

Yes! The name is cheesecake because one of the main ingredients is cheese. Don’t worry, this doesn’t mean it is cheesy!

How to Freeze Waffles