What to do with Leftover Pho Broth

Here are 3 Things to do with Leftover Pho Broth 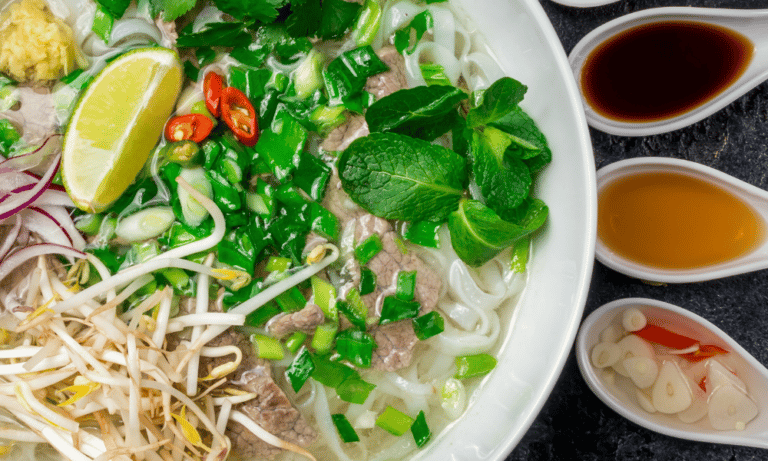 Few foods are as filling, versatile and delicious as pho that can always satisfy a full table. A steaming bowl of broth with a full selection of meats, vegetables, herbs, and noodles? What’s not to love?

Making pho broth from scratch is a reasonably straightforward process, but it can be tough to make the perfect amount. You will, without a doubt, always end up with some leftover pho broth. Luckily that warming broth does not have to go to waste.

3 Things to do with Leftover Pho Broth

There are plenty of ways to use your leftover pho broth that goes beyond just making another bowl of pho. Here are the best ways that you can make full use of flavourful pho broth:

For those times when you have overwhelmed yourself with your pho broth but can’t stand the thought of having another pho meal for the 5th day in a row, you can always freeze the broth.

Freezing your pho broth can also work if you don’t have enough leftovers to make an entire dish. You can freeze the leftovers and add them to your pho when making a fresh batch. Here is how:

When ready to use your pho broth again, it is easy to thaw. You can simply add the frozen pho broth directly to your dish and allow the heat to melt it, and incorporate it into your dish.

Alternatively, you can use a microwave in 20-second intervals to separate the frozen broth from its container. Once it has defrosted enough, transfer the broth to a pan on a low heat to finish thawing it completely.

You will probably want to re-season the pho broth once it has fully defrosted, as it can start to lose its flavour if frozen for too long.

2) Use To Replace Other Stocks

You would be surprised at how many recipes call for the use of stock, whether that be beef, chicken, or vegetable stock. Essentially, stocks are just specifically flavoured hot water which is precisely what pho broth is.

So why not give your dish that extra layer of flavour and use pho broth to replace stock?

Replace the stock in your recipe with an equal amount of pho broth. Just be aware that the pho broth may not live up to the flavour profile of meatier-based stocks like beef stock unless it includes some beef flavour.

Try to match the stock you replace with the flavour profile of your pho broth so that the broth will improve your dish rather than change its flavour completely. For example, if you have made a chicken-based pho broth, use it to replace chicken stock rather than beef stock.

Just remember to separate any lingering meat, vegetables, or noodles from the broth before you use it as stock. Otherwise, you may ruin the desired texture of your dish.

Pho broth can be kept in your fridge for up to 6 days and be used as stock. It does not last as long in your fridge as actual stock, so do not use pho broth that is older than 6 days.

When you do not have enough pho broth left to make a full bowl of pho, just change up the dish’s ratio a little. Make predominantly-noodle dishes like ramen or noodle soup and use the pho broth as another dish’s broth.

Seeing as pho broth is usually noticeably spicier than the broth used in other noodle dishes, it would be worth diluting the broth. This can be done by adding hot water directly to the broth and giving it a good mix.

Start by adding 1 cup of hot water to your pho broth and give it a quick taste. If it is still obviously spicey, keep adding 1/2 cup of hot water and mixing the broth until you are happy with the diluted flavour.

Do you still have questions about what to do with leftover pho broth? Then these FAQs might help you out:

How Long Is Leftover Pho Broth Good For?

When stored in the fridge, leftover pho broth lasts around 6 days. When frozen, it can be stored for up to 6 months.

What Can You Do With Leftover Pho Noodles?

Unfortunately, cooked pho noodles will need to be eaten soon after cooking them. They can become clumped and stodgy if left.

What to Serve with Banh Mi