What is the Best Onion for Fajitas?

White, Yellow, Red or Spring? Discover Which is Best for Fajitas 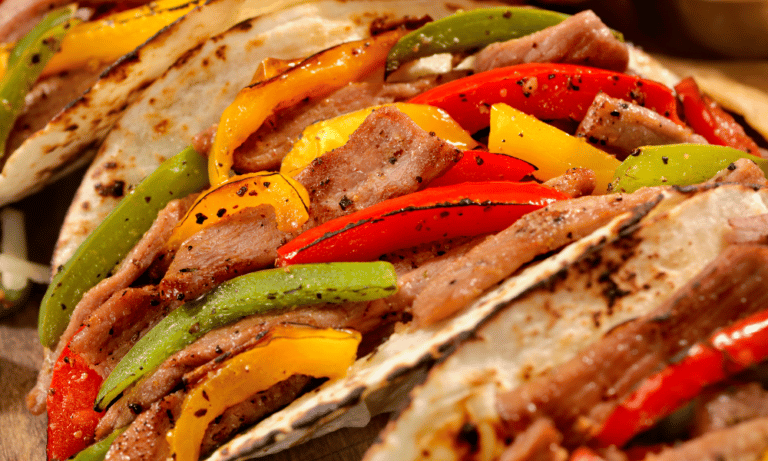 The core components of a fajita are the meat, the peppers and the onions. Getting one of these elements wrong can ruin your fajita. So, what is the best onion for fajitas, and is there a wrong choice?

The best onion to use for fajitas is a white onion that has been sliced into half rings and quickly cooked alongside peppers and meat. It should still retain some bite for the perfect fajita.

Why are White Onions the Best for Fajitas?

White onions are often used in fajitas as they can be cooked quickly alongside the other fajita ingredients without losing too much of their flavour or texture.

There’s no point using a red onion, for example, which you’ll then cook for the same time as the peppers. By the time the meat and peppers have cooked, the red onion will have become fully cooked, losing all texture and a lot of its onion flavour. Instead, they’ll become sweet.

This is why white onions are perfect for use in fajitas. They have the right balance of crunch, bite, flavour and spice.

How Do You Cut White Onions for Fajitas?

You want each element of a fajita to be roughly the same size. Chicken or steak is usually cut into finger pieces and peppers into strips. This is why slicing the onion into thick half moons is the best approach.

Simply peel the onion, cut it in half and then slice it into 1cm-wide strips. This will allow some of the crunch to be removed when they’re cooked but not too much.

What Other Onions Can Be Used in Fajitas?

Although the following might not be traditional options when it comes to fajitas, they can all provide that much-needed onion hit whilst also bringing something a little extra to your usual fajita recipe:

Ultimately, cooked white and yellow onions have few differences between them and only a few fussy foodies will be able to detect the differences.

Cooking yellow onions in a fajita mix might bring out a little more sweetness than a white onion, but when you add a sauce, spice mix and chillies, there is little chance you’ll notice the difference.

If you want to add a slightly more subtle flavour to your fajitas without the need for cooking, then sliced, raw spring onions are an easy option. And don’t be afraid of including the green tops – they’re packed with flavour too!

Bright red pickled onions are synonymous with Mexican food. Fajitas might not be traditionally Mexican but adding a pinch of pickled onions is a great way to give it a more authentic Mexican flavour.

The great news is that you don’t need to cook them. Just use them as a topping, as you would with most sauces and salsas. The acidic pickle flavour will cut through the fattiness of any meat and the spiciness of any chillies while providing that much-needed crunch.

How to Quickly Pickle Red Onions

Combined 180ml of white wine or apple cider vinegar with 180ml of water, 1tbsp sugar and 1tsp salt in a bowl until the sugar and salt have dissolved. Finely slice 1 red onion and then pour the pickling liquid over the top and leave for 1 hour.

If you still have questions about the best onion for fajitas or onions in Mexican food in general, then look over these FAQs:

What Onions Do Mexican Restaurants Use?

Do Red Onions Go With Fajitas?

Absolutely! Ultimately, when it comes to choosing the best onion for your fajita, it is down to you to decide what is best for your palate. If you like a giant onion hit, then white onion would work best. If you like a bit more sweetness, then red onion is a great choice.

How to Reheat Chilli Con Carne

Quesadilla vs Burrito: What’s the Difference?