Discover How to Use Sumac and What it Tastes Like 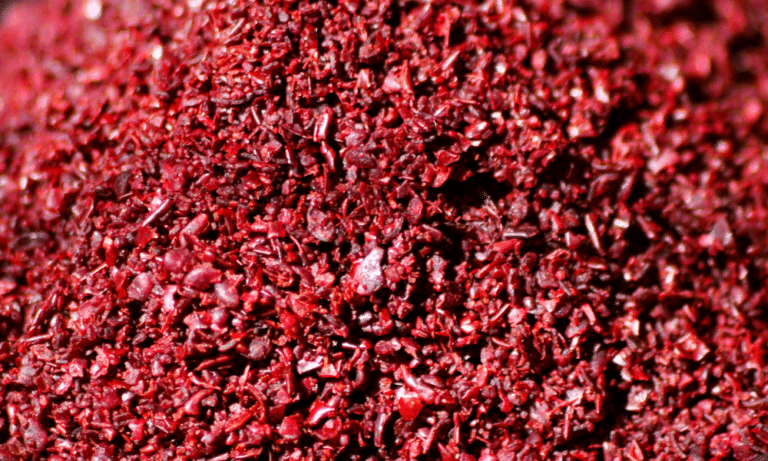 Most commonly used in Middle Eastern and Persian dishes, sumac is the ground berries of the Rhus Coriaria shrub. In the souks of North Africa, you can find whole sumac berries which can then be freshly ground at home but in Western Europe and the US you’re far more likely to find them ground – and there’s nothing wrong with that.

Sumac shrubs tend to grow in rocky terrains and are common in Turkey and Iran. The berries are harvested, dried and then ground to produce the sumac powder you’re likely to find in the supermarket.

Another common source of sumac is in za’atar spice mix where it is combined with sesame seeds, oregano, cumin, coriander and salt. Za’atar is then used to top hummus, flavour meat or mix with olive oil for a dip.

Sumac has a sour, tartness similar to lemon. In fact, before lemons were freely available, sumac was used instead in the Middle East. But its flavour profile isn’t that one dimensional. It’s also earthy with a little hit of fruitiness that you associate with berries.

If you take a little pinch and place it on your tongue, you’ll know it’s full of citrus and acid. This will give you a good idea of how it tastes.

How to Use Sumac

When it comes to using sumac, you’re only limited by your imagination. That’s why it has become such an important staple in any spice cupboard. You don’t just have to limit its use to Persian dishes.

Sumac doesn’t need to be cooked. Cooking it can often cause it to lose its delicate citrus flavours. Instead, why not try roasting a tray of vegetables and seasoning them with sumac once they’re cooked.

Mix equal quantities of sumac, paprika, dried oregano, cumin and ground coriander then rub into your meat. This works particularly well for chicken but works well with any meat.

This might sound a little bold but it’s a delicious concoction that works well as breakfast or dessert. Grab a roasting tray and tip in a mix of berries. Add a sprinkling of sumac, a drizzle of honey and a splash of water and roast for 20 minutes or so until the berries have begun to break down. Serve over greek yoghurt.

You can even make dipping sauces and salad dressings with it. Don’t be scared of sumac and just think of how you would normally use lemon and use the sumac in the same way. You can even use it in place of salt to season cooked vegetables as it will help to draw some flavour out of them.

How to Store Sumac

The best way to store sumac is in an airtight container or jar where you would store most common spices such as cumin or turmeric. It should be stored in a cool, dark, cupboard where the temperature remains constant.

Like many spices, sumac is unlikely to go bad if it is stored correctly. It should be placed into a jar with a tight-fitting lid and then kept away from direct sunlight and temperature changes.

Struggling to find sumac? Then below are a few sumac substitutes that can be used in some cases.

Where to Buy Sumac

Several years ago you’d have struggled to pick up sumac in any of the major supermarkets. But as tastes have changed and people have become more adventurous, it has become far easier to get hold of and you’ll find it in most of the big supermarkets in the UK now.

If not, then many of the online foodie stores such as Sous Chef will stock sumac.

If you’ve got other specific questions about sumac and how to use it, then these might help:

Yes, some sumac berries are poisonous. Of course, if you buy sumac in your local supermarket then they’ll be selling sumac that is safe for consumption.

No, sumac is not spicy. It does not contain any elements that are spicy. The main flavours of sumac are sour and citrusy. It also has hints of fruit and earthiness. It is not peppery or spicy.

Is Sumac Good for You?

Yes, sumac is good for you. In fact, it is reported to be one of the most effective anti-inflammatory spices. It is also loaded with antioxidants.

Yes, sumac is vegan. It is made simply by crushing the berries of the sumac plant and will not contain any animal-based ingredients.

Got more questions about sumac? Then ask away in the comments section at the bottom of this page and we’ll help out as much as possible!

How to Reheat Chicken Shawarma

How to Reheat Falafel

Harissa vs Gochujang: What’s the Difference?