What is Sea Buckthorn?

Discover What Sea Buckthorn is and How to Use It 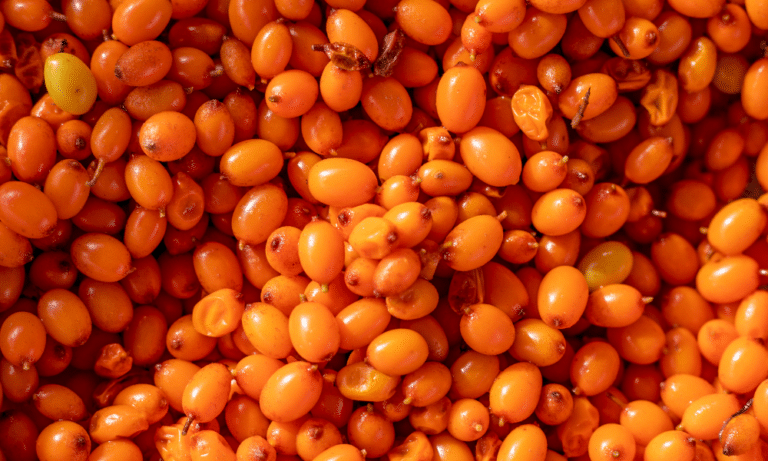 Sea buckthorn berries, sometimes referred to as lemon of the North, are a small, orange berry found on bushes in coastal, sandy areas. They are used for their tart, sour flavour as well as their reported superfood benefits including more than 190 micro-nutrients.

The flavour of sea buckthorn can only be described as an intense sourness. They are incredibly tart and taste like a sour orange mixed with hints of mango and the sweetness of pineapple.

The overarching taste of sea buckthorns, however, is sourness. It needs to be used sparingly otherwise it will overpower any and every dish.

How to Use Sea Buckthorn

Although you need to be careful when using sea buckthorn to avoid overpowering your other ingredients, it can be used to enhance a range of things.

Generally speaking, you’ll only want to use the juice of the berries as eating them whole can be quite intense on your taste buds.

Try sea buckthorn in any of the following:

Take 500g of berries, 500ml of water, 250g of white sugar and a vanilla pod to the boil then simmer for 10 minutes. Strain it off into sterilized bottles and then use as you would any other cordial.

The juice from sea buckthorns can be used in cakes, jellies, jams, mousses, tarts and custards. Consider where you would normally use lemon juice and swap it out for sea buckthorn.

You’ll find sea buckthorn is a lot more tart than lemon so you may not want to only swap out half the lemon juice for sea buckthorn juice.

Steeping sea buckthorn in boiling water with a few slices of ginger is one of the easiest teas to make and it will be packed full of flavour. You may need to sweeten it up with some honey and it will also take well to be spiced up with star anise or cinnamon.

If you want to go down the Scandinavian route then sea buckthorn vinegar is the thing to try. Sea buckthorn berries simply need to be left to infuse vinegar for a few weeks in a sterilized jar.

The vinegar can then be used to make salad dressing, to season fish dishes or to even pimp up dips and sauces.

How to Store Sea Buckthorn

If kept in an airtight container, sea buckthorn berries will keep in the fridge for around a month before they go off. You can tell that they’re going off in the same way you would check more common fruits such as blueberries or raspberries.

Can You Freeze Sea Buckthorn?
Yes, you can freeze sea buckthorn berries in two ways. You can either flash-freeze the berries on a tray before bagging them up when frozen. Or, you can turn the berries into juice and then freeze this juice into ice cubes.

Trying to recreate the tart and sour flavours of sea buckthorn will be a bit of a challenge. Unfortunately, no food will be able to match the flavour identically. However, there are a few more accessible fruits you could use instead:

Where to Buy Sea Buckthorn

Sea buckthorn is hard to find as fresh berries. It has a fairly short season and harvesting the berries is actually quite challenging as the plant itself is spiky. When you do manage to find sea buckthorn berries, they’ll probably come with a hefty price tag.

Some specialist food shops may have them fresh, if not, you’ll need to visit a local farm shop or farmer’s market that is near a coastal area that is likely to have sea buckthorn growing.

The other option is to buy powdered sea buckthorn. It won’t have the same fresh, zingy hit of flavour but it’s a viable option that’s far easier to get hold of if you want to add flavour to baked goods and smoothies.

Can You Forage for Sea Buckthorn?
It is possible to forage for sea buckthorn. They are found in coastal areas and are in season from late summer through to autumn. But you should only forage if you know what you’re doing and know that the plant you’re dealing with is 100% sea buckthorn.

If you’ve got other specific questions about sea buckthorn and how to use it, then these might help:

Where Does Sea Buckthorn Grow?

Sea buckthorn is found in sandy or chalky soil in coastal regions in Northern climates such as Northern Europe and Russia. It is often found growing out of rocky cliffs.

Can You Grow Sea Buckthorn at Home?

Yes, it is possible to grow sea buckthorn at home but it will require very sandy soil with good drainage.

Yes, sea buckthorn can be invasive. When left in its natural range, it tends not to spread uncontrollably. It’s when it’s grown outside its native habitat that it can become uncontrollable.

Got more questions about sea buckthorn? Then ask away in the comments section at the bottom of this page and we’ll help out as much as possible!