Discover What Kohlrabi Is and How to Use It 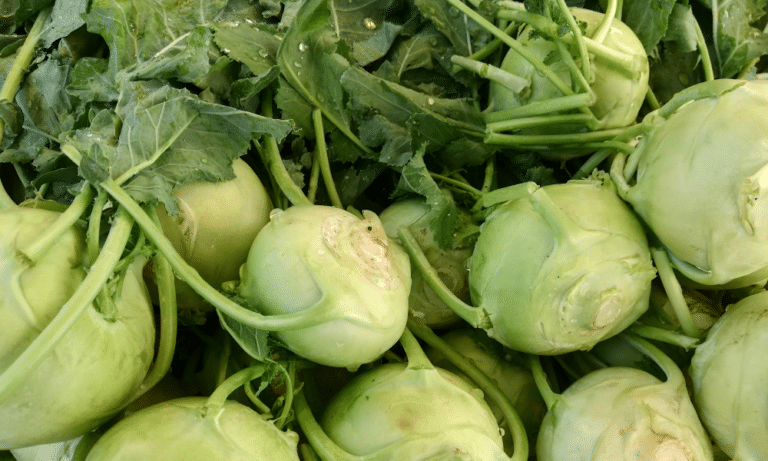 With its unusual, alien-like appearance, kohlrabi is simply a bulb-shaped vegetable from the cabbage family and takes its name from the German for turnip cabbage, which goes someway to describe its taste.

Although many people assume it is a root vegetable, it is actually a bulb with a swollen stem. The majority of each kohlrabi will grow above ground with just the root beneath the surface.

It is usually found as a pale green colour with darker green leaves but it can also be found in a deep shade of purple with purple-veined dark green leaves. The colour, however, doesn’t impact the flavour in any way.

As the German name suggests, kohlrabi tastes like a mix between turnip and cabbage. The flavour itself is very mild (some might even say bland) which means it takes on strong spices and flavours really well.

It does have a subtle pepperiness to it which is more noticeable when it is used raw in salads, remoulades and slaws.

Texturally, it has a crisp, crunch which softens when cooked to take on the texture of cooked turnip or swede. If it is roasted then it will retain its texture but boiling it can cause it to become mushy.

How to Use Kohlrabi

You might think that a peculiar looking vegetable like kohlrabi has limited uses… But that couldn’t be further from the truth. We’d actually go as far as to say it is one of the most versatile vegetables on the planet:

When dressed with a traditional coleslaw sauce, kohlrabi will soften much like radish, celeriac or carrot. Peel the tough outer skin, grate or cut into thin ribbons, mix with your usual slaw ingredients and dress.

Like many vegetables, kohlrabi roasts particularly well. It can either be roasted on its own or it can be mixed with other vegetables with roast well.

Peel the kohlrabi then chop into equal-sized chunks. There aren’t any rules on how big or small you cut them, just make sure they are all roughly the same size. Drizzle with olive oil, salt, pepper and a pinch of nigella seeds before spreading out on a baking sheet then roast in a hot oven for 25 minutes or so.

You can dress with fresh herbs, sprinkle with sumac or smother in aioli – anything works!

Like most vegetables, kohlrabi can be used to make soup. We’d avoid making a strictly kohlrabi-only soup as it will be quite bland but it works really well for bulking out other soups – in the same way potato is often used.

Another trick is to roast kohlrabi, as above, before mixing with stock and blending to create a soup. You’ll get far more depth of flavour by roasing it beforehand.

Whether it’s grated, thinly shaved or julienned, raw kohlrabi will add crunch and subtle pepperiness to any salads. Salads are often boring because they’re one dimensional.

Adding different textures and flavours takes your standard green salad to the next level – that’s exactly what kohlrabi will do for you.

You wouldn’t think that a kohlrabi could be turned into a complete meal but it certainly can. It’s something that Hungarians have mastered with a range of vegetables.

Töltött Karalábé is a traditional stuffed dish from Hungary. Boil a whole kohlrabi until tender. Cool, then peel the outside skin before scooping out the majority of the inside. Make a filling using the scooped out kohlrabi, onion, garlic, mushrooms, minced meat, breadcrumbs and seasoning then stuff into the kohlrabi.

Place the kohlrabi into a roasting tray, pour over a cup or two of stock and then bake for 45 minutes at 180C.

Can You Eat Kohlrabi Leaves?

Yes, you can eat kohlrabi leaves in the same way you would use spinach or kale. Simply blanch, drain, season and enjoy! All too often, people throw away the leaves that come with vegetables when they’re perfectly edible.

How to Store Kohlrabi

You should store the leaves and bulbs separately as they will have different storage needs. The leaves should be used pretty quickly as they turn within a few days. If you’re not going to use them in the next day or two then they can be stored in a ziplock bag.

The bulb, however, is much easier to store as this can simply be placed into a vegetable drawer in the fridge. It will begin to soften slightly when it is beginning to turn so keep a close eye on it to avoid having to throw it out.

How Long Will Kohlrabi Keep in the Fridge?

Kohlrabi will keep for longer than most vegetables. It will keep in the fridge for around 2 weeks. The leaves are unlikely to last quite as long so it’s worth trimming them and using them first.

How to Freeze Kohlrabi

The versatility continues with kohlrabi because it can also be frozen for up to 8 months! Prepare it how you normally would then blanch in boiling water for 60 seconds before draining. Thoroughly dry before portioning it out into freezer bags which must be sealed tightly.

Blanching will ensure kohlrabi retains its texture and flavour while it is stored in the freezer. It might take an extra few minutes to do but it’s well worth the effort for the long term.

Although many supermarkets now stock kohlrabi, perhaps you’re struggling to get hold of it but need it for a particular recipe? Then why not try these options:

Kohlrabi doesn’t have the strongest flavour in the world. This does mean that most root, winter vegetables will work in its place.

Where to Buy Kohlrabi

It wasn’t that long ago when kohlrabi was limited to organic vegetable boxes and local farmer’s markets. Fortunately, more and more supermarkets are stocking slightly more unusual vegetables these days, including kohlrabi.

If you’ve got other specific questions about kohlrabi and how to use it, then these might help:

Does Kohlrabi Need to be Peeled?

Although the outer peel is edible, it can be quite tough to eat so it’s worth spending the time to peel the coarse outer layer before using it, especially if you’re going to use it in a raw dish.

Is Kohlrabi Good For You?

Of course! Kohlrabi is a vegetable and, like most vegetables, is great to include in your diet. It is high in fibre, calcium, magnesium and a range of vitamins.

When is Kohlrabi in Season?

Kohlrabi is actually available year-round as it’s such a hardy vegetable that can be grown throughout the seasons. However, they are at their best in the colder months.

Is Kohlrabi a Root Vegetable?

No, kohlrabi is not a root vegetable. This is a common misconception about kohlrabi. It is actually a bulb, related to broccoli and cabbage.

Got more questions about kohlrabi? Then ask away in the comments section at the bottom of this page and we’ll help out as much as possible!