Heard of Gochugaru But Not Sure What it is? Then Find Out! 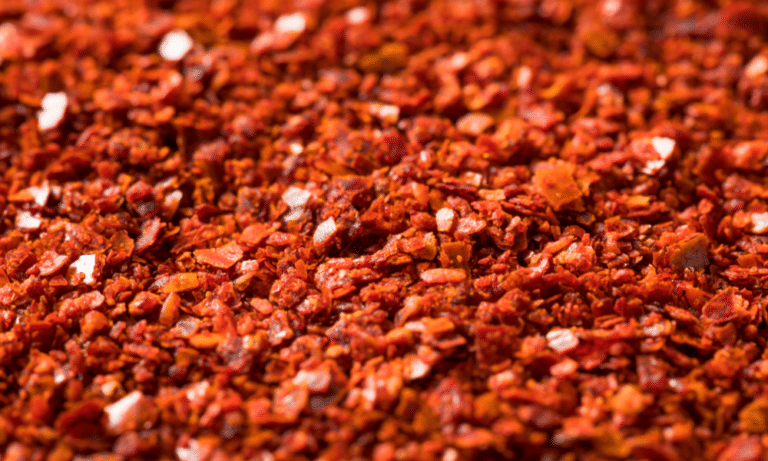 It is particularly bright red, especially when compared alongside other more generic chilli powders. It also feels different as it tends to be much softer in texture.

Gochugaru is one of the most complex chilli powders in the world in terms of taste. Most chilli powders are fairly one-dimensional. They’ll be spicy or smoky. But gochugaru has multiple levels of taste.

Although the heat level can differ from mild to hot, most gochugaru powder will be smoky, sweet and spicy simultaneously which is why its use is both essential and varied in Korean cooking.

What is the Scoville Level of Gochugaru?

Gochugaru is medium in heat with between 4,000 and 8,000 Scoville heat units. This is roughly the same as jalapenos.

How to Use Gochugaru

There’s one primary use for gochugaru that most people are aware of (more on that in a minute). But gochugaru doesn’t have to be limited to this one use. It’s one of the most versatile chilli powders you can have on your spice rack.

Kimchi without gochugaru isn’t kimchi. Although there will be simplified versions of kimchi that opt for other chilli powders (or even paprika?!), gochugaru gives authentic kimchi that iconic level of heat and smokiness.

If you want an authentic, traditional kimchi recipe then this one from Hyosun over on Korean Bapsang is perfect.

Chilli oil is an easy way to pimp up any dish – if you like heat, of course! Whether it’s drizzled on pizza, spooned over rice or stirred through noodles, it’s an easy way to make even the blandest plate of food tasty.

Add a cup of gochugaru to a jar with a tight-fitting lid. Bring a pot of vegetable oil to the boil with a few aromatics such as garlic, spring onions and ginger then simmer for 15 minutes or so.

Strain the hot oil into your jar, give it a gentle stir. Leave it for a few weeks in the cupboard so that the flavours can develop and then, once opened, keep in the fridge for a few months.

As gochugaru is delicate in flavour and texture, it can be used directly on foods to season them. Try mixing salt, gochugaru and ground sesame seeds to use as an instant flavour boost on a variety of dishes.

You know that seasoning mix… Try adding a teaspoon or two to freshly popped corn. No, really! Gone are the days when popcorn has to be salty or sweet. a hit of chilli is one of the best ways to take popcorn to that next level.

How to Store Gochugaru

The best way to store gochugaru is in an airtight container, in a cupboard, away from direct sunlight and temperature fluctuations. Ultimately, you should store it how you store any other spices.

How to Freeze Gochugaru

You can freeze gochugaru for around 2 years, however, it’s not the best way to store it. You’ll find that the flavour can degrade when it’s stored in the freezer.

The problem is, you won’t know that the flavour has degraded until it is far too late. You’ll go to use it from the freezer and find that it doesn’t taste of anything. That would be a disaster!

Not really! Gochugaru will not have a specific expiry date but, like most spices, if it’s not stored in an airtight container away from direct sunlight then the flavour will begin to degrade.

Struggling to find gochugaru? Then below are a few gochugaru substitutes that can be used in some cases.

None of these substitutes will be a perfect match for gochugaru, unfortunately. Some will be spicier. Others will be smokier.

However, there’s nothing from stopping you combining a few of these substitutes to get a little closer to the flavour profile of gochugaru.

Where to Buy Gochugaru

2 or 3 years ago, trying to find gochugaru without going to a specialist food store or an Asian market was near-impossible. Fortunately, supermarkets are stocking more and more spices.

Gochugaru can still be a challenge to find in small supermarkets but many larger stores will stock it.

If you can’t find it then it can still be purchased online with ease from Amazon, Sous Chef or other specialist food stores.

If you’ve got other specific questions about gochugaru and how to use it, then these might help:

Can You Use Gochujang Instead of Gochugaru?

We would avoid using gochujang in place of gochugaru. Although they are made from the same core ingredient, their taste profiles are not the same and their textures are completely different.

How Hot is Gochugaru?

Gochugaru is medium in heat with between 4,000 and 8,000 Scoville heat units. This is roughly the same as a jalapeno, more than a poblano but significantly less than tabasco chillies.

What is in Gochugaru?

The only thing in gochugaru is crushed or ground Korean chillies. Generally, Korean chillies are sun-dried before having their seeds removed. These are then ground up or crushed to form gochugaru.

Yes, gochugaru is gluten-free. Usually, gochugaru only contains one ingredient and that is Korean chilli. If, however, you buy poor-quality gochugaru then there is a chance that it has been combined with other ingredients to bulk it out.

Got more questions about gochugaru? Then ask away in the comments section at the bottom of this page and we’ll help out as much as possible!

Why Does My Kimchi Taste Bitter?

How to Reheat Korean Fried Chicken