What is Fennel Pollen?

Discover What Fennel Pollen are and How to Use It 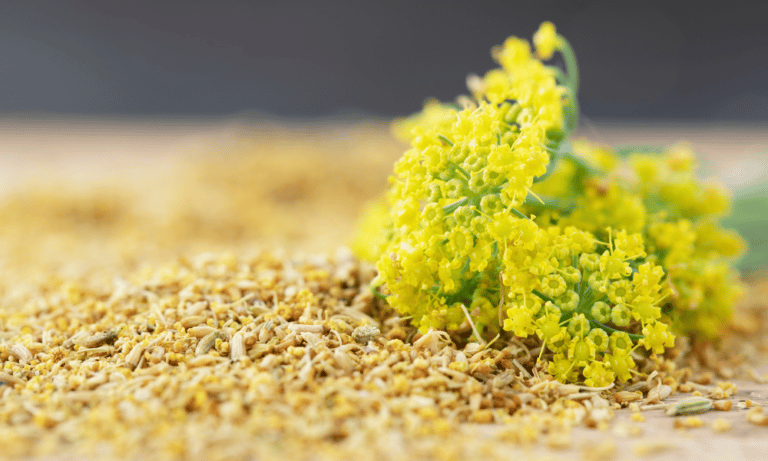 Fennel pollen is a type of pollen that is produced by the anthers of the female flower of the fennel plant. Fennel is a plant that has many medicinal and culinary uses, and it’s often called anise.

Fennel pollen is the fine dust that comes out of the anthers of the fennel plants.

This pollen is a natural food supplement that has been used for centuries for medicinal purposes.

It is a rich source of antioxidants, vitamins, minerals, and amino acids, and it also has anti-inflammatory and anti-bacterial properties.

As a really powerful antioxidant, fennel pollen is said to be helpful in the maintenance of healthy skin, hair, and bones. It is also said to help the immune system stay strong and may help the body fight against cancer, heart disease, and diabetes.

Fennel pollen is a particular type of pollen that’s often used in cooking. It is renowned for its very distinct aniseed flavour.

The flavour of fennel pollen is aromatic and, on its own, is quite subtle, so it’s often used to impart other flavours or add a subtle layer of sweetness to food.

It’s also a key flavour in many European and Middle Eastern dishes.

As a result, the flavour of fennel pollen can be a little divisive because of its earthy and sometimes strange undertones.

Some people love it, while others think it tastes like dirt.

The good news is that it can easily be disguised by combining with other intense flavours or by cooking it with other foods.

How to Use Fennel Pollen

Fennel pollen can be used in many ways, including as a food supplement or in beauty treatment.

Fennel pollen was actually introduced to American cooks by Italian immigrants who planted the flowering plant in California. But how can you use it?

The sweet and earthy flavour of fennel is often paired with pork (such as porchetta), and it’s also great on roasted chicken before cooking.

Fennel pollen can be added as an earthy addition to grains and pulses such as chickpeas, bulgar wheat and couscous to add a deep earthy tone to plant-based dishes.

Pasta and pizza dishes with robust flavours, such as puttanesca and arrabbiata sauces, can have fennel pollen added as a light topping to give an anise touch to the dish.

Adding fennel pollen can be a really great addition to soups and salad dressings where an earthy depth is needed and can be amalgamated in the liquid bases almost undetected.

How to Store Fennel Pollen

Fennel pollen is a healthy and nutritious food, but it has to be stored properly to maintain its freshness.

When exposed to oxygen, fennel pollen can lose its aroma and flavour quite quickly.

This method means the fennel pollen can be kept for 3-9 months as long as it is kept away from any moisture and direct sunlight.

Air-dry the grains and then store them in large jars with lids that can be tightly sealed – such as Kilner jars.

The grains should then be kept in a cool, dry place away from direct sunlight. This can preserve the fennel pollen for years.

Generally, when buying fennel pollen it will come dried which means it can last for years in the cupboard without expiring. It will lose some of its potency over time, however.

Here’s what you can successfully use in place of fennel pollen if you don’t happen to have it to hand:

Where to Buy Fennel Pollen

When it comes to buying fennel pollen, it’s unlikely that you’ll be able to pop down to your local supermarket to pick it up. It’s a little harder to come by as it’s quite specialist. Instead, you’ll need to look further afield:

If you’ve got other specific questions about fennel pollen and how to use them, then these might help:

How Do You Make Fennel Pollen?

Once your fennel plants have flowered, cut the flowers from the plant and place them in a sandwich bag. Tie the bag closed with the stalks poking out then hang the bag upside down. As the flower dries, the pollen will drop into the bag.

Is Fennel Pollen and Fennel Seeds the Same?

No, they are not the same thing. One is pollen and the other is seeds. The big difference is that the pollen will be much more concentrated in flavour so you’ll need to use far less of it.

Got more questions about fennel pollen? Then ask away in the comments section at the bottom of this page and we’ll help out as much as possible!

How to Freeze Hamburger Buns

How to Freeze Hot Dog Buns

How to Microwave Halloumi