What is Buddha’s Hand?

Learn What Buddha's Hand Is and How It Can Be Used 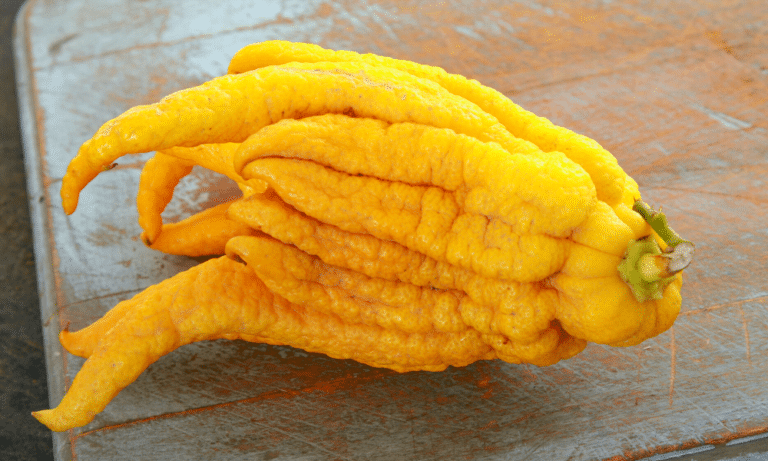 Buddha’s hand, or fingered citron, is a citrus fruit. It looks very similar to a lemon at the top with elongated finger-shaped fruits growing from its base to form a hand… Hence, the name.

The surprising thing about Buddha’s hand is that it doesn’t contain much juice or flesh that can be used in cooking. Instead, it’s the rind that is packed full of citrus notes which can then be used in cooking, baking, dressing, marinades and even drinks!

Why Buddha’s Hand?
It was traditionally used as an offering at Buddhist temples and represents happiness and fortune. It is still given as a gift in China and Japan.

The flesh is almost inedible because the pith is incredibly bitter. This is why it is rare that anything but the peel is used. The peel itself also isn’t eaten but is used in large pieces to infuse fragrance and aroma into dishes.

The smell will be lemony and floral. In fact, it can be quite hard to tell the difference between the smell of lemon and the smell of Buddha’s hand. The main thing to remember is that a little goes a long way as Buddha’s hand is far more fragrant.

How to Use Buddha’s Hand

You may only be able to use the peel of Buddha’s hand in your cooking or baking, but that doesn’t mean the options you have are limited. Here are just a few ways you can easily use Buddha’s hand:

To make candied Buddha’s hand, you’ll need to snap some fingers from the fruit and then carefully cut as much of the peel from the pith. It’s vital that you don’t include any pith as this will have an unpalatable bitter flavour.

Once you’ve prepared your Buddha’s hand, simmer in a large pot of water for around 30 minutes until softened. Drain and then return to a pot. For every 1 cup of Buddha’s hand, you’ll need to add in 1 cup of white sugar and 1 cup of water. Bring the mixture up to 110c then cool, drain and dry.

Need More Info?
Check out this recipe on All Recipes for further information on timing and temperatures.

A common vinaigrette is made up of olive oil and lemon juice, usually in a ratio of 2:1. You can add another dimension to a dressing by incorporating some Buddha’s hand. Of course, you can’t use the juice as it has very little. But there is a way it can be used in a vinaigrette.

Citrus fruits are essential in marmalade. It’s what gives marmalade its tangy, sourness. If you have a recipe for thick-cut, chunky marmalade then try swapping out some of the orange or lemon peel for Buddha’s hand peel instead.

Lemon and orange zest are used time and time again in baked goods from cookies and biscuits to cakes and muffins. Well, instead of using generic lemon zest, you can swap equal quantities out for Buddha’s hand zest, instead.

How to Store Buddha’s Hand

However, when stored in the fridge, it will lose some of its citrusy flavours so if you know you’ll use it up within a week, keep it out.

Can You Freeze Buddha’s Hand?

Yes, you can freeze Buddha’s hand. There’s no point freezing the whole fruit as it’s mostly unusable and will take up a lot of space. Instead, carefully cut the peel from the fruit and store it in freezer bags. The good news is that you won’t even need to defrost it before use.

Buddha’s hand may look alien but it’s flavour is fairly easy to replicate with far more accessible citrus fruits that you can pick up in the supermarket:

Where to Buy Buddha’s Hand

Unfortunately, it’s highly unlikely that you’ll come across Buddha’s hand in your local supermarket. It’s a very unique ingredient that you’ll have to actively hunt for.

The best place to go to find Buddha’s hand is an Asian supermarket. Some more foodie stores, such as Whole Foods, may stock it on rare occasions but it’s not worth relying on them having it as it’s not a guarantee.

If you’ve got other specific questions about Buddha’s hand and how to use it, then these might help:

How Do You Grow Buddha’s Hand?

Like most citrus plants, Buddha’s hand needs warm temperatures to ripen and must be grown in both a sheltered and sunny spot. You can learn more about growing Buddha’s hand here as it’s not easy.

Where Does Buddha’s Hand Grow?

Buddha’s hand is native to Northeast India and China. It grows on a large shrub or tree which can grow to around 5 metres in height.

Both will provide the same flavour. An open-handed Buddha’s hand is easier to use as there are gaps between each finger making it easier to remove one at a time.

Got more questions about Buddha’s hand? Then ask away in the comments section at the bottom of this page and we’ll help out as much as possible!