What are Espelette Chillies?

Discover What Espellete Chillies are and How to Use Them 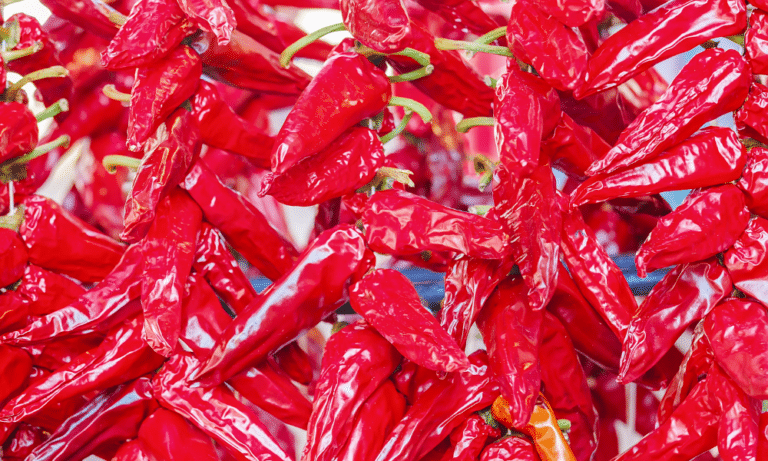 Espelette chillies are a chilli grown in the French commune of Espelettes in the Pyrenees-Atlantiques department. They are also referred to simply as espelette peppers or piment d’Espelette. They’re not excessively hot with between 500 and 4,000 Scoville heat units.

Although French cuisine isn’t often associated with chilli heat and spice, the region in question is close to the Spanish border and not that far from the Northern coasts of Africa where the region’s food has taken influences from.

With barely 2,000 inhabitants, Espelette is a small, traditional community in France. But that hasn’t stopped it become famous for cultivating this popular pepper. Each chilli grows to around 6 inches long and is then often dried.

Many people are put off from using chillies in their cooking, thinking that they only provide an overbearing heat to dishes. This is far from the truth when it comes to Espelette chillies. It is a sweet chilli with between 500 and 4,000 Scoville heat units.

This means it is milder than jalapeno, serrano chilli and tabasco.

Instead of adding intense heat to dishes, Espelette adds a slight smokiness with fruity, sweet notes. When ground, Espellete both takes on the appearance and flavour of smoked paprika.

How to Use Espelette Chillies

You may think that an obscure chilli from a small village in France is going to have fairly limited use in your kitchen. But you couldn’t be more wrong, fortunately! Here are just a few of the ways you can use them:

Meat, whether it’s beef, chicken or something else, can handle a variety of spices. Ground Espelette peppers can be used as part of a dry meat rub to add flavour, smokiness and spice.

You can create an Espellete-inspired, Basque-style rub by combining equal quantities of ground Espellettes, salt, herbs de Provence and garlic powder. Rub it over meat, leave it in the fridge overnight and continue to cook as you normally would.

Espelette can be used anywhere that you would normally use paprika to add smokiness and gentle heat to a dish.

This could mean you use Espelette to season soups, stews, casseroles. You could also add a pinch to roasted vegetables, boiled eggs or cheese on toast.

Piperade is a ratatouille-like dish that uses Espelette to add smokiness and spice. It is an authentic Basque dish. Many recipes online have been bastardized and avoid using traditional ingredients (such as Espelettes) but this recipe is particularly true to the region.

You wouldn’t think a few peppers, a couple of tomatoes and an onion can be transformed into such an unctuous warming feast but that’s exactly what adding Espelette does to a dish!

No, really! Chocolate, stoned fruit and chilli work in perfect harmony if you get your quantities right. In fact, many artisan chocolate shops sell dark chocolate infused with piment d’Espelette.

If you’re willing to take the plunge and try making a dessert with Esepelette peppers then this chocolate cake is a great place to get started.

How to Store Espelette Chillies

Like all spices, Espelette chillies should be kept in an airtight container away from direct sunlight and where the temperature remains cool and consistent. This will ensure that they don’t lose their colour or flavour.

If you have managed to buy whole Espelette chillies then store them whole, grinding them as and when you need them in your cooking. Whole chillies are quite delicate so it’s worth storing them in a rigid, airtight container to avoid crushing them as the back of a kitchen cupboard.

Espelette chillies do not expire in terms of going off and becoming unsafe to consume. They do, however, lose some of their flavour as time goes by.

Like many spices, Espelette chillies are popular because of their unique flavour that isn’t replicated in other spices. No substitute is going to match the complex flavour of Espelette peppers. However, if you’re struggling to find

Where to Buy Espelette Chillies

Unfortunately, Espelette chillies are not easy to come by outside of specialist food shops and online retailers. You’re highly unlikely to find them sitting on your local supermarket shelves.

If you do decide you’re set on using Espelettes in your cooking, then you’ll have to head online or might even have to go as far as booking yourself a trip to the South-West of France?

If you’ve got other specific questions about Espelette chillies and how to use them, then these might help:

Not at all. Espelette (or chillies) are not used for their heat but more for their sweet and smoky flavour. They will have a gentle pepperiness but nothing that’s overpowering.

Where are Espelette Peppers on the Scoville scale?

Espelettes are fairly low down on the Scoville scale with between 500 and 4,000 Scoville heat units. This is below many common chillies including jalapenos, serranos and Tabasco.

Can You Grind Whole Espelette Peppers?

Of course! You may want to split the chillies down the middle to remove some seeds to reduce the heat but whole Espelette can be placed into a spice grinder and ground to a powder.

Got more questions about Espelette chillies? Then ask away in the comments section at the bottom of this page and we’ll help out as much as possible!

How to Reheat Creme Brulee

Crudité vs Charcuterie: What’s the Difference?