Paneer vs Mozzarella: What’s the Difference?

We Reveal the Similarities and Differences Between Paneer and Mozzarella 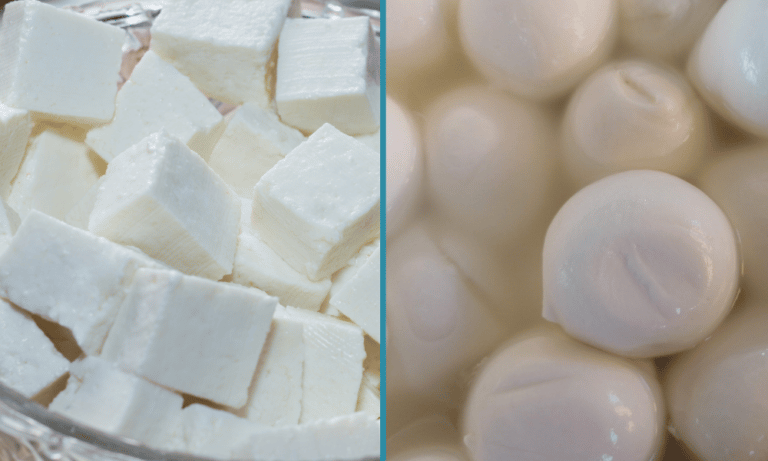 There are so many types of cheese in the world, spanning across continents and cultures. It can be confusing to know what cheese is comparable to another. Paneer and mozzarella and two of the most commonly used cheeses. But are the cheeses really that similar? Or are they entirely different from each other?

The biggest difference between paneer and mozzarella is how the cheese’s milk curds are formed. For paneer, heat and acid are used, creating a very firm cheese. Mozzarella relies on whey and rennet, creating an elastic, soft cheese.

Paneer uses torn milk which is essentially cows milk (or, more traditionally, buffalo milk) that has been boiled and then had its curds separated by either vinegar, lemon juice or another acidic ingredient.

Not much flavour is usually added to the curds themselves, which are drained and left to solidify. As such, paneer is predominantly milky and only very slightly sour.

The overall flavour of paneer is mild, but the milk taste is strong enough to help soothe the harshness of spicy dishes. That is why you will often find paneer used in Middle Eastern dishes, especially curries.

Texturally, paneer cheese is very dense and crumbly, with an extremely high melting point. You can add it to a hot dish and it will stay together, similar to tofu.

Can You Melt Paneer?

Due to the use of heat and acidic ingredients in its production, paneer cheese is practically impossible to melt as the milk’s chemical structure has changed. However, if heated for long enough or at a high enough temperature, the cheese will start to melt a little.

Traditionally made using water buffalo milk in Southern Italy, mozzarella is an extremely accessible soft cheese used all over the world. Though it is most commonly made using regular cow’s milk today.

Its soft, mildly milky flavour is very versatile. This mild flavour is due to the cheese foregoing any ageing time. It is eaten or sold as soon as the cheese is made.

Also, because of its non-existent ageing, mozzarella is extremely soft. Its silken, elastic texture comes from whey and rennet added to milk which is then heated until the resulting curds turn elastic-like.

Is All Mozzarella the Same?

Several types of mozzarella exist depending on the milk that is used. In Italy, fresh mozzarella is the most common, made using traditional water buffalo milk (Mozzarella di Bufala), which is slightly sweeter. Most mozzarella found in supermarkets (fior di latte mozzarella) will be made using cow’s milk.

Differences Between Paneer and Mozzarella

It only takes a look at paneer and mozzarella to see some clear differences between the two kinds of cheese. Such as:

Similarities Between Paneer and Mozzarella

Depending on how you plan to use the cheese, you may be able to use paneer in place of mozzarella and vice versa, which is especially helpful given the price for either traditional paneer or mozzarella.

Here are some similarities between the two kinds of cheese:

Paneer vs Mozzarella: Which Wins?

Let’s put these two cheeses against each other: It’s paneer vs mozzarella! But which one is going to come out on top? Have your say below:

Do You Prefer Paneer or Mozzarella?

Want more answers about paneer and mozzarella? Then check these FAQs out:

Can You Substitute Paneer for Mozzarella?

Is Paneer or Mozzarella Cheaper?

Mozzarella is far cheaper than paneer in most supermarkets. It has become a staple cheese across the globe which is why it can now be picked up for such a low price.

Mostaccioli vs Rigatoni: What’s the Difference?