Onigiri vs Musubi: What’s the Difference?

We Reveal the Similarities and Differences Between Onirigi and Musubi 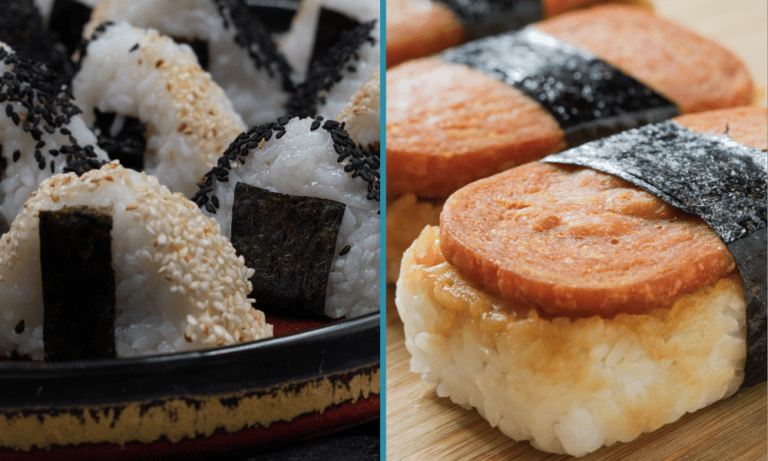 Every country and culture has its own comfort dishes that feel like receiving a hug every time it is eaten, a little taste of home no matter where in the world you are. For Britain, comfort food includes a roast dinner and pie. In Japan, a common comfort food is rice balls.

There are countless varieties of rice balls in Japanese cuisine, which the rest of the world is only now getting acquainted with, thanks to the rise in popularity of making bento boxes.

Two recurring dishes being shared in these bento boxes are onigiri and musubi, which appear to be causing confusion online. So, what are they?

The biggest difference between onigiri and musubi is their name. Onigiri is a word primarily used in the West of Japan and musubi in the East when referring to rice balls. But if you were to order either at a restaurant, you would be presented with the same dish.

Onigiri is a word that has become synonymous with any rice ball online and in Western Japan. However, the actual definition of onigiri is a little more specific.

Made using plain white rice and simply flavoured with salt, onigiri is essentially the Japanese version of a sandwich.

The rice acts as the bread and is moulded around a variety of fillings depending on your personal tastes. These fillings could be vegetable, meat, or fish based but are nearly always savoury and incredibly tasty.

Hence why plain white rice is used, to make it easy to pair any filling you wish with it.

The word onigiri is a take on nigirimeshi which is a type of rice ball entirely covered in nori seaweed. Specifically, a sheet of nori, giving the rice ball a salty finish.

For the most part, onigiri tends to be shaped into a cylinder or triangle as that is easier to do by hand.

But with onigiri trending around the world, various moulds have been developed to create various shapes, from animals to hearts. So long as the filling of the onigiri is covered entirely by the white rice then it can still be considered onigiri.

What Do You Fill Onigiri With?

If you are new to making onigiri, there are a range of simple fillings that you can try. Mixing canned tuna, a little mayo, and soy sauce is one of the easiest options. Or you could use smoked salmon with a little soy sauce.

In Eastern Japan, musubi (or o-musubi) tends to be the general word for rice ball. But true musubi is a specific type of rice ball with specific characteristics that sets it apart from other rice ball dishes.

There are a few variations of musubi around the world such as the spam musubi which is a Hawaiian take on the Japanese rice ball.

But at its core, musubi is a white rice ball filled with an array of fillings such as pickled plumbs and salted salmon, but there is really no limit to the things that you can fill a musubi with.

Musubi do tend to be more savoury snacks, filled with ingredients that can pair well with the lightly salted white rice exterior.

You can make your rice ball any shape and still have it fall under the musubi category, so long as the white rice entirely encases the filling and you finish the rice ball off with a strip of nori.

Which Rice is Used for Making Musubi?

Similarities Between Onigiri and Musubi

As you may expect from the above, there are far more similarities between onigiri and musubi than differences, such as:

Differences Between Onigiri and Musubi

In spite of all of the similarities, onigiri and musubi have differences worth noting if you plan to make your own bento box. For example:

Onigiri vs Musubi: Which Wins?

If you had to pick between onigiri and musubi, which would you vote for? We’re putting them against each in our onigiri vs musubi poll:

Do You Prefer Onigiri or Musubi?

Do you still have questions about how onigiri and musubi compare? Then have a look over these:

No, musubi as a concept is not Hawaiian. However, a popular variation of musubi with spam was invited in Hawaii which is why musubi is often associated with Hawaii and not Japan.

Karaage vs Katsu: What’s the Difference?