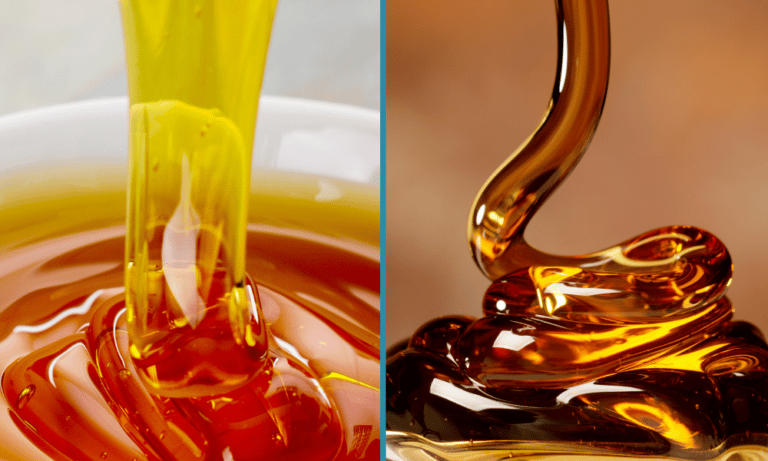 Depending on how often you have visited America, golden syrup will likely be your go-to syrup on your morning pancake or waffles. But maple syrup is also a popular option. So, how different is it from the very British golden syrup?

The most significant difference between maple syrup and golden syrup is the ingredients they use to develop their sweetness. Maple syrup relies on maple tree sap which is naturally sweet, and golden syrup uses refined cane or beet sugar.

What is Maple Syrup?

Maple syrup is a sweetener naturally made using the sap of (unsurprisingly) the maple tree. The sap is boiled and cooked until 1/3 of the water has evaporated, and the natural sweetness of the sap forms a syrup.

The vast majority of maple syrup is made in Canada, as Canada has an endless supply of sugar maple trees. Other countries can make maple syrup artificially or use substitute tree species, but this is not considered pure maple syrup.

Real maple syrup has an unmistakable maple taste comparable to a nutty flavour. The syrup is naturally sweet and tastes like caramel when cooked.

How Do You Use Maple Syrup?

Maple syrup is traditionally enjoyed on pancakes, waffles, or other sweet breakfast treats. However, it can also be used like honey in meat marinades or sauces.

What is Golden Syrup?

Golden syrup, also called light treacle in some parts of the world, is an extremely thick sugar syrup made using refined sugar cane or beet sugar.

Technically golden syrup is a by-product of inverting sugar, but it is undoubtedly a delicious coincidence.

Water and citric acid are also added to the syrup. This stops the sugar in the syrup from crystallising as quickly, creating a silky smooth syrup.

Golden syrup is one of the most British sweeteners. It was created in Britain in 1883 and has since found its way into various sweet treat recipes.

How Do You Use Golden Syrup?

Usually, golden syrup is too sweet for most people to eat by itself. Instead, it is incorporated into flapjacks, gingerbreads or drizzled as a sweet topping on waffles.

Just because they are both a type of sweet syrup does not mean that golden syrup and maple syrup are interchangeable. In fact, if you tried to swap out one for the other in a recipe, you will undoubtedly notice the difference.

Here is every difference of note between maple syrup and golden syrup:

For all the differences between maple syrup and golden syrup, there are a couple of reasons that people from both sides of the Atlantic Ocean still find it difficult to separate the two syrups at first glance:

It’s time for you to have your say! Which do you prefer? It’s maple syrup vs golden syrup! Are you going to put your vote behind natural, Canadian maple syrup or sticky, British golden syrup?

Do You Prefer Maple Syrup or Golden Syrup?

Do you still have questions about how maple and golden syrup compare? Then check these additional FAQs out:

Can You Substitute Golden Syrup for Maple Syrup?

Although they are both syrups, they have a different flavours and consistency. This is why we would not substitute golden syrup for maple syrup or vice versa.

Maple syrup is the healthier of the two products. Golden syrup contains a high level of sugar. Maple syrup has a lower glycemic index.

How to Reheat McDonald’s

How to Microwave Pancakes