We Reveal the Similarities and Differences Between Korma and Tikka 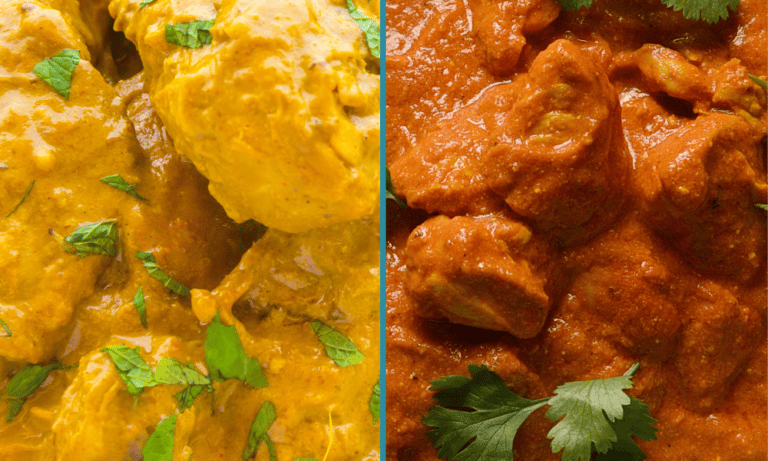 To someone outside Indian culture, korma and tikka masala may be mistaken for one another. However, there is a big difference in the flavours of the dishes, with korma being sweeter and tikka masala having a much earthier taste.

Most unfamiliar with Indian cuisine will likely recognize korma as chicken korma, but korma actually refers to a specific cooking method used in Indian cuisine that can be applied to a range of proteins. The process requires the meat of choice to be braised, traditionally in a mud pot over an outside mud stove.

Modern korma dishes differ worldwide, but all require the dishes’ protein to be quickly cooked and then left to slow cook in a creamy sauce. Some type of liquid needs to be added to keep the ingredients deliciously moist. In the UK and Northern India, yoghurt is used, while other Indian regions prefer some kind of milk.

The result is a super thick sauce and tender vegetables and meat. A range of spices varying from cumin to paprika are added early on to allow the flavour to spread through the dish. Though the dish is more of a warmer spice than a spicy heat, it is a mildly heated dish.

Should You Use Curry Powder in Korma?

Korma dishes do not typically include curry powder in their spice blend, though a korma spice blend can be used across various cuisines as an all-purpose spice mix.

What is Tikka Masala?

Arguably, tikka masala is as British as it is South Asian to the point where some call it a completely inauthentic Indian dish. Regardless of authenticity, tikka masala embodies the flavours of Indian cuisine with little effort.

There are many meats and vegetables that can be used in tikka masala, from chicken to eggplant. So long as the protein pairs well with the acidity of tomatoes, then it is easy to use any protein you wish. The tomato sauce base needs creaminess to offset the high levels of acidity, which is where the thick yoghurt comes in.

As for the spices used in tikka masala, they veer towards a rich earthiness that is spicey enough to leave your tongue tingling without burning your mouth. These spices include turmeric, black pepper, ginger, and paprika.

Is Tikka Masala the Same as Butter Chicken?

Similarities Between Korma and Tikka Masala

Unless you have been raised around Indian and South Asian cuisine, it can be easy to confuse two of the most popular Indian dishes in the Western world. Especially when those dishes have specific similarities such as:

Differences Between Korma and Tikka Masala

For all their similarities, kormas and tikka masalas are different enough at their core that they should not be confused for one another. For example:

Korma vs Tikka Masala: Which Wins?

If you’re forced to pick, which are you voting for? It’s time to put your mark against one in our ballot between korma vs tikka masala:

Do You Prefer Korma or Tikka Masala?

Do you still have questions about korma, tikka masala and how they might differ? Then check these FAQs out:

Sort of… In India, Korma covers a whole category of dishes whereas in the UK it often refers to one particular dish.

The tikka element is Indian but the masala sauce was added to satisfy the British who were used to seeing their meat served in a gravy-like sauce.

How to Reheat Indian Food