Korean Radish and Daikon... They're the Same, Right? 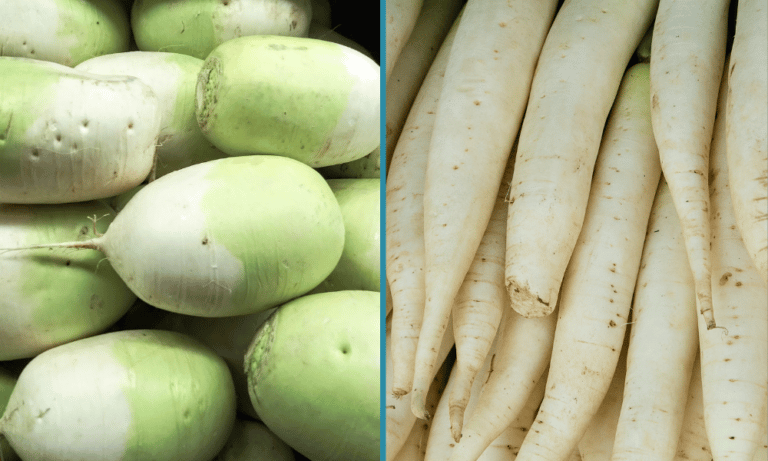 When you are only used to cooking dishes with ingredients that are local to you and your culture, it can often be an overwhelming experience exploring other ingredients and learning just how many varieties there are out there.

For lesser-used ingredients like radishes, understanding their various varieties can be a bit trickier. So here is a quick breakdown of two related vegetables – Korean radish and daikon.

Though they are both parts of the radish family, daikon is much sweeter than Korean radish. Daikon remains just as sweet when cooked, whereas Korean radish loses its limited sweetness the longer it is cooked.

What is Korean Radish?

What the rest of the world knows as Korean radish (or simply radish to those in Korea) is not the same as the tiny pink radish that is grown in the UK. For starters, Korean radish is white with bright green leaves. They are also larger than English radishes, but are still short.

Despite being short, Korean radishes are thick and stocky. So much so that they retain a firmness even once cooked, though this can add a wonderful crunchy element to your dish.

As for the taste, the main body of a Korean radish has the distinct peppery flavour of most radish varieties but with a balancing sweetness to accompany it. If you are not a fan of the peppery kick, cooking Korean radish for long enough will dilute the taste.

Korean radish leaves have their own uses in Korean cuisine and are seen as no less important that the main radish itself. The soft leaves can be dried or fried and used similarly to cabbage.

Can You Eat Korean Radish Raw?

You can eat Korean radish both cooked and raw. Just note that the impactful sweetness and pepperiness will become diluted once the radish is cooked, so it is much tastier raw.

Also known as the winter radish, daikon is a radish through and through. From its bright green leafy tops to its surprisingly juicy, crispy texture when raw. As far as radishes go, it is amongst the larger varieties, growing up to 24 inches in length.

When cooked, daikon is very easy to soften up, changing texture with little effort. This makes it a versatile vegetable, lending its diversity to various dishes, from salads to stir-fries.

Daikon has that undoubtedly radish pepperiness that can give your meal a little kick without being overwhelming. However, that peppery kick is not the prominent taste in daikon–it is mostly secondary to a surprisingly juicy sweetness.

Where Does Daikon Come From?

Most associate daikon with Japanese cuisine, but daikon naturally grows all over East Asia, though it is particularly popular in its native countries of China and Japan.

Similarities Between Korean Radish and Daikon

Korean radish and daikon are two of those vegetables that, while different in their own ways, have so many obvious similarities that they can be used interchangeably in pretty much every dish you can imagine using a radish in. Some of these similarities include:

Differences Between Korean Radish and Daikon

There are some vegetables that, while related, are so drastically different from each other that you would never think to mistake them. In the case of Korean radish and daikon, their differences are more underhanded and less obvious:

Korean Radish vs Daikon: Which Wins?

If you had to pick between the two, which would you vote for? We’re putting them against each other in our Korean radish vs daikon poll:

Do You Prefer Korean Radish or Daikon

Do you have more questions about Korean radishes, daikon and what makes them different? Then have a look at these FAQs:

Can You Substitute Daikon for Korean Radish?

Yes, although purists would argue otherwise, in most cases, you would not be able to tell whether daikon or Korean radish has been used as they have a similar flavour and texture.

What is the Difference Between Daikon and Mooli?

Nothing! Daikon is just another name for mooli. They are the same type of radish.

What to Serve with Banh Mi