Jambalaya vs Paella: What’s the Difference?

We Reveal the Similarities and Differences Between Jambalaya and Paella 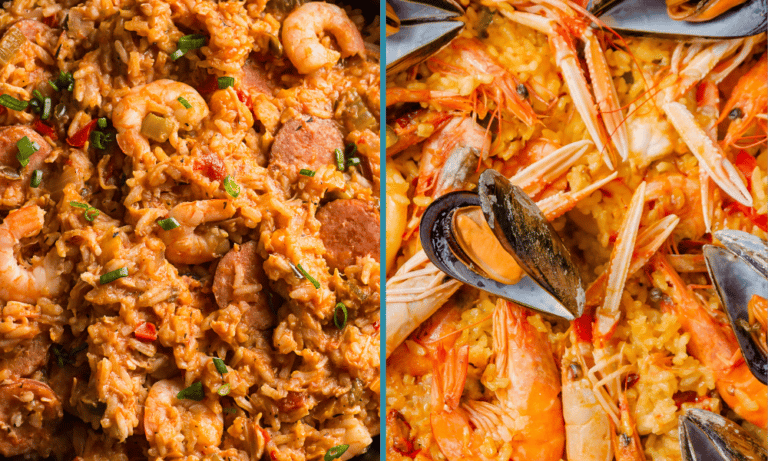 It can be hard coming up with dinner ideas that can keep your family fed and happy without spending a lot of money on groceries or tiring yourself out. Every culture has its go-to recipes that can help during the week, but it seems to be rice-based dishes that tick the most boxes.

Paella is a Spanish dish, acting as a true signifier of Spanish cuisine. Jambalaya is technically an American creole dish that has heavy West African influences.

Jambalaya is a dish born from many cultural influences from French to Spanish through to African, but is now viewed as a classic American creole dish from Louisiana.

Food historians believe that because of jambalaya’s similarities to the West African staple jollof rice, jambalaya is an African dish brought to America during the trans-Atlantic slave trade.

While that seems very likely because of its close flavour resemblance to jollof rice, jambalaya is a delicious dish in its own right.

Jambalaya is a meat and rice dish with some vegetable and seafood twists thrown in to make the dish stand out. Long grain rice has been the most commonly grown rice in Louisiana for centuries, forming the base of jambalaya.

Mixed in with the rice is an assortment of sausage, smoked meat, and chicken or pork. In areas of Louisiana where seafood is easily accessible, shrimp is often used in jambalaya with a handful of crawfish thrown into the mix.

The combination of vegetables used in jambalaya is not unique.

They are considered the trinity of creole cooking, further cultivating jambalaya as an American creole dish. Celery, onion, and bell pepper help make jambalaya a slightly sweet, spicy, but hearty dish anyone can enjoy.

Does Jambalaya Include Tomatoes?

Though jambalaya is very similar to jollof rice, it is missing tomatoes. That is because historically, tomatoes were not easy to come by in Louisiana, so they were not incorporated into most dishes

Though people outside of Spain view paella as an inherently Spanish dish, Spanish locals know that its origins are more specific. Paella is an essential symbol of the Valencian region and has seen many iterations throughout its history.

At its core, paella uses a base of round grain rice which is a rice that is high in starch and usually used for rice pudding, making it ideal for soaking up the chicken broth and olive oil it is cooked in.

As for the proteins of the dish, chicken, seafood, and vegetables such as green beans are favoured.

Each family paella recipe will have its own take on the right meat and seafood to use, but there is almost always a land meat, some seafood, and hearty vegetables used.

These are all cooked in one big pan and have been since paella’s invention.

All the seasonings used for paella aim to emphasise the taste of the proteins. Saffron or turmeric are traditionally used to add a complex sweetness to the dish and provide a floral aroma.

Are There Different Types of Paella?

Paella de Marisco is a seafood-centric paella that uses seafood and seafood broth instead of land meat. Paella Valenciana is the more traditional paella recipe, while Paella Mixta uses a more hearty mix of proteins and vegetables.

Similarities Between Jambalaya and Paella

By definition alone, jambalaya and paella seem very similar. Here are a few more ways that the two dishes are closely matched:

Differences Between Jambalaya and Paella

Given their vastly different historical backgrounds, jambalaya and paella do have their noticeable differences:

Jambalaya vs Paella: Which Wins?

It’s now time for you to pick your favourite. If you could only eat one dish, which would you be voting for in our match-up of jambalaya vs paella?

Do You Prefer Jambalaya or Paella?

Do you have more questions about jambalaya and paella and how they are similar? Then check these FAQs out:

Can You Use Paella Rice in Jambalaya?

Which Rice Should You Use for Jambalaya?

When making jambalaya, you should opt for a long-grain variety of rice. Generally, the rice used in traditional jambalaya is white.

Which Rice Should You Use for Paella?

The most common paella rice is bomba. It can be expensive and hard to get hold of outside of Spain. You could, instead, use any short-grain rice such as arborio or calrose.

Tahini vs Tzatziki: What’s the Difference?

Does Rhubarb Need to Be Peeled?

How to Microwave Prawns