Is Kiwi a Citrus Fruit?

You Know What a Kiwi Is... But, are they a Citrus Fruit? 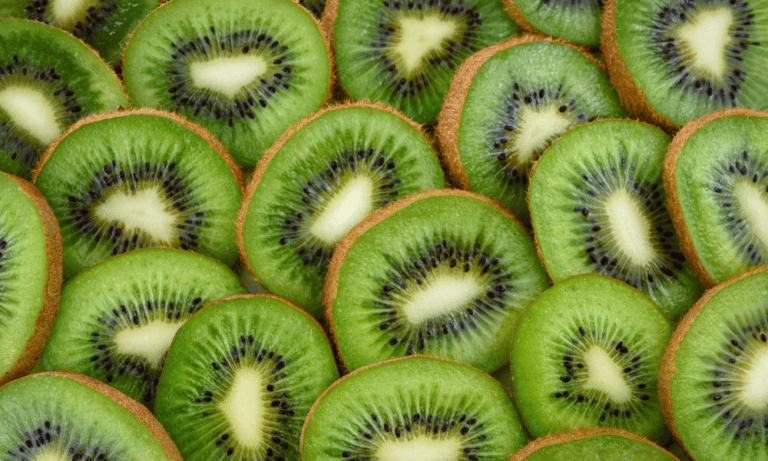 There are fruits that everyone in the UK is familiar with and loves. Apples, oranges, lemons and pears have been incorporated into British cuisine for centuries.

Other fruits, such as kiwis, are more exotic and can confuse.  A common question that can arise is: are kiwis a citrus fruit?

Kiwi fruits are not part of the citrus family as they do not grow on a shrub and contain very little citric acid, which is a key component of all citrus fruit. Instead, a kiwi is technically a berry.

What Kind Of Fruit Is Kiwi?

In the west, kiwis are often thought to be citrus fruit. However, kiwis are also known as the Chinese gooseberry, which is a lot truer to what a kiwi actually is.

On the more scientific side of things, kiwi is part of the Actinidiaceae group, which is a family of flowering plants usually yielding a berry fruit. Simply put, a kiwi is a berry grown on a kiwi vine.

This is true of all kiwi varieties, from the red kiwi to the golden kiwi; they are all berries.

You can find kiwis growing naturally all over the world. They are thought to be originally native to China but have since spread so kiwis are now cultivated in New Zealand, California, Greece, and France.

How Are Kiwis Different To Citrus Fruits?

It is easy to see how some may think that kiwis are a citrus fruit. Many citrus fruits, like oranges and limes, grow much better in humid conditions, like a kiwi.

In fact, farmers are likely to have the two fruits growing at the same time.

How kiwis tend to be used is also similar to most citrus fruits. They are juicy enough to be juiced like a lemon and provide the perfect freshness to a smoothie.

They can also be enjoyed raw like a mandarin. You can even eat the kiwi skin. Likewise, the flavour of a kiwi offers a tart balance to sweet baked goods in the same way that a lime would.

However, a kiwi fruit is not a citrus fruit, and as such, there are some key differences to be aware of:

The most significant difference is the level of acidity that kiwis possess (or lack).

Citrus fruits get their name from the high amount of citric acid that they have which is where their tangy and sometimes bitter taste comes from.

Kiwis have a very minor amount of citric acid, so much so that it is hardly distinguishable in the taste of the fruit.

Such thin skin means that the kiwi does not have a lot of protection from bacteria or bruising. This shortens the shelf life of kiwi considerably, only allowing it to last up to 10 days in your fridge.

On the other hand, most citrus fruits can be kept for up to 4 weeks when stored correctly and still be juicy and delicious.

There also tend to be more varieties with citrus fruits than kiwi fruit.

Granted there are several species of kiwi, but they are still easily identifiable as a kiwi and do not differ drastically.

A citrus fruit comes in a variety of sweetness, tartness, shapes, colours, and uses, all depending on where they are grown and the type of shrub that they come from.

There are two parts to a kiwi, its fuzzy brown skin and the bright green inner flesh that is speckled with little black seeds. The very centre of the flesh is more white.

Technically, every part of the kiwi is edible, even the fuzzy brown skin.

Many compare the kiwi skin to the skin of an apple. It has a flavour similar to the flesh of the kiwi, just more diluted.

The texture of kiwi skin can be off-putting to some due to the fuzzy hairs. Beyond the hairs the skin itself is not very tough and easy to bite.

The flesh of a kiwi is the complete opposite of kiwi skin. It is very juicy and soft, like the flesh of an orange. The edible black seeds do offer some crunch to the kiwi, but that can be quite a welcome addition to the texture.

As for the taste of kiwi flesh, it is undoubtedly unique.

Some say that kiwi tastes like strawberry, others suggest pineapple, but it seems to be more of a mix of the two fruits.

The predominant taste of a kiwi is certainly sweetness, which is very refreshing and perfect for a hot summer day.

However, undercutting that sweetness is a balancing acidity that helps to make the fruit that much more refreshing. The acidity is not as prevalent as in citrus fruit but the balance is still there in some capacity.

Do you have more questions about kiwi fruits and what they are? Then check out these FAQs:

Is Kiwi a Tropical Fruit?

Generally, kiwi is considered a tropical fruit because it grows in warmer climates around the world.

How to Microwave Garlic Bread

How to Roast Courgettes