How to Freeze Cabbage Soup 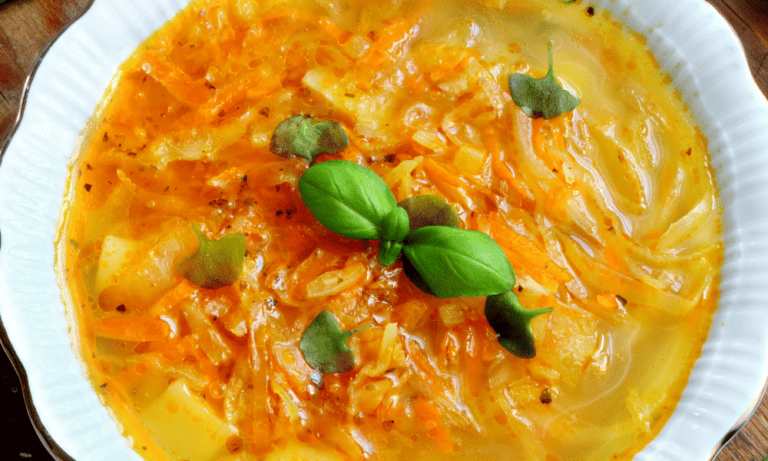 The last thing you want to do after a long day at work is put effort into making a filling meal from scratch. That is why most people tend to fall back on fast food or unhealthy quick meals just to fill them up. But what if you didn’t have to settle for instant ramen for the 5th night in a row?

Soup is one of the best meals to prep in advance when you know it will be a tough week. The issue is many soups start to lose their flavour if made in advance. Fortunately, cabbage soup is full of nutritious goodness but has just enough sweetness and flavour to make it a meal. Better yet, it is slow to lose this flavour, making it the perfect soup to make in bulk and freeze.

To freeze cabbage soup, you must first allow it to cool entirely before decanting it into air-tight containers or good-quality freezer bags. Seal the containers up and then pop them into the freezer.

How to Freeze Cabbage Soup

As is the case with most soups, there is only one effective way to freeze cabbage soup.

However, you do need to follow that method carefully to ensure that your cabbage soup can last in your freezer without turning mushy or becoming completely tasteless. Here is that method:

How Do You Defrost Cabbage Soup?

When you are ready to defrost your cabbage soup, remove a portion of the soup from your freeze the night before and leave it in your fridge to defrost naturally. This will ensure that the soup’s texture remains consistent and no harmful bacteria start to grow in the soup as it defrosts. Then heat up the soup in a pot on the stove.

How to Freeze Cabbage Soup Successfully

One of the best things about cabbage soup is how easy it is to make. Well, plenty of soups are easy to make, that’s why they are so popular.

But cabbage soup, in particular, is one of those meals that gives you a lot of flavour for little effort. Freezing cabbage soup is just as easy as making the soup, so long as you keep these few tips in mind:

Cabbage soup, like many other soups, freezes very well.

Soup, in general, is the perfect texture to freeze without it changing too much, and cabbage soup is one of the most flavourful soups. These two advantages combined mean that cabbage soup will remain flavourful and have perfect consistency while frozen.

Do you have further questions about freezing cabbage soup? Then have a look at these:

Can You Freeze Cabbage Soup That Has Potatoes In It?

Although it is possible to freeze it, potatoes in soup tend to go quite mushy once frozen and thawed, which can ruin the texture of the soup.

How to Reheat Apple Crumble

How to Roast Turnips

How to Roast Cauliflower