Hoisin vs Teriyaki: What’s the Difference? 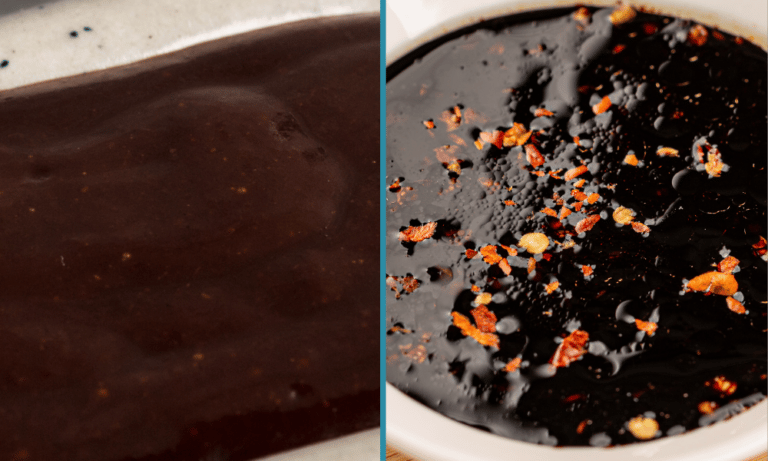 Asian cuisine is full of delicious dishes finished with a whole range of unique sauces. But it is hoisin and teriyaki sauces that are arguably the most well-known in the western world.

Some think that the sauces are substitutable, but that is not the case. Just like anything else, hoisin and teriyaki sauces have their own unique uses.

Though soybeans are used as the base ingredient for both hoisin and teriyaki sauces, they are used in different ways. Hoisin sauce uses fermented soybean paste, while teriyaki uses regular soy sauce, which is more diluted.

What is Hoisin Sauce?

In some places worldwide, hoisin sauce is referred to as Chinese BBQ sauce, and for good reason. The sauce is a key traditional Chinese sauce, but it is also found in some Vietnamese dishes.

Hoisin sauce uses a base of fermented soybean paste.

It is this paste that makes hoisin sauce so thick and dark. Other liquid ingredients are added to the sauce, such as sesame oil and vinegar, but not enough to thin the sauce too much.

A combination of fermented soybeans, vinegar, and sesame oil makes for a very salty umami taste which would be overwhelming without other flavours. That is why garlic and some kind of sweetener (often honey or cane sugar) are used to offset the saltiness.

Many hoisin sauce brands will add chillies, though not enough to make the sauce overly spicy, only slightly smoky like BBQ sauce.

All those ingredients combined make for a robust sauce that is unique and full of flavour.

It is thick enough to be used as a condiment but is most often used for stir-fries or sweet-leaning side dishes. Most popularly, hoisin sauce is used as the perfect sauce to pair with Peking duck.

Does Hoisin Sauce Include Fish?

Despite hoisin being a derivative of the Chinese word for seafood, hoisin sauce does not include any fish or seafood. Historians think that once upon a time, hoisin may have included some kind of seafood for that umami taste. But modern-day hoisin sauce is suitable for vegetarians and vegans.

What is Teriyaki Sauce?

Despite being used across countless Japanese dishes, teriyaki sauce didn’t originate in Japan! Evidence suggests that teriyaki sauce actually has roots in Hawaii, on the other side of the world!

Though teriyaki sauce is also used in Hawaiian cuisine, it is mostly seen as an Asian sauce.

2 main ingredients are used for teriyaki’s base: Soy sauce and mirin, a rice wine found in Japan. This combination is what gives the sauce its umami hit with undeniable saltiness.

Traditionally, the only other ingredient added to teriyaki sauce is sugar, and lots of it. It is this high sugar content that balances out the saltiness of the soy sauce and mirin base.

However, the sugar does mean that the sauce is easy to burn when cooked at high heat for longer than a few minutes.

Because the sauce is so simple in its flavours and ingredients, it can be paired with endless dishes. From pork to tofu to fish, teriyaki sauce can be used as a marinade or (more commonly) as a glaze.

How Do You Stop Teriyaki Overpowering a Dish?

Some tend to be a little too generous with teriyaki sauce because of its simple combination, but those plain ingredients can overwhelm the rest of your dish if used in excess. That is why it is best to use teriyaki sauce in a dish served with bread or rice to soak up any spare sauce and make it easier to eat.

Differences Between Hoisin and Teriyaki

So why is it so easy to get hoisin and teriyaki sauce confused with each other? Here are some reasons:

Similarities Between Hoisin and Teriyaki

Of course, some key differences between hoisin and teriyaki sauce stops them from being entirely substitutable for each other:

Hoisin vs Teriyaki: Which Wins?

They might be quite different, but they can often be put against each other as some of the most popular Asian sauces. But which wins in a hoisin vs teriyaki match up? Vote below:

Do You Prefer Hoisin or Teriyaki?

Do you have other questions about hoisin, teriyaki and what makes them different? Then give these FAQs a read over:

Can You Use Hoisin Instead of Teriyaki?

No, swapping hoisin for teriyaki is not a good idea. They might both have soy bases and be Asian but that is where the similarities end. They have a different consistency and flavour from one another.

How Do You Use Hoisin Sauce?

A spoonful of hoisin sauce can be added to stir-fries, noodles and rice dishes to give them an umami hit. Of course, it should also be used in duck pancakes!

How Do You Use Teriyaki Sauce?

Teriyaki sauce works best as a marinade or glaze for a range of meat and fish – especially chicken and salmon. Brush your food with the sauce then cook under a hot grill.