Do You Know the Differences Between Grits and Mash? 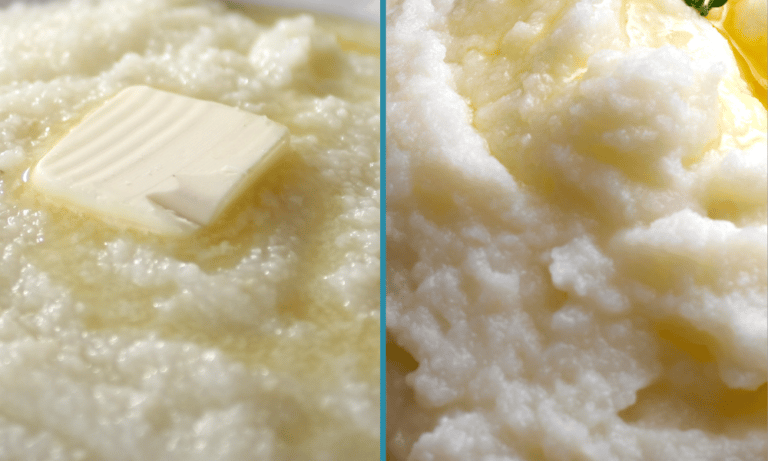 It is so easy to be caught up in our own cuisine and stay utterly blind to other foods from around the world. So, when we hear of a food that isn’t in our comfort food, we instantly start comparing it to a food we are more likely to know. A lot of the time, that comparison is made between American and British food.

Both America and Britain have their own signature dishes, from corndogs to the Sunday roast. But two dishes that are constantly compared are grits and mashed potatoes. Are these dishes from separate corners of the world really that different?

The biggest difference between grits and mashed potatoes is their core ingredients. Grits are a type of cornmeal porridge, while mashed potatoes (as its name would suggest) are made from potatoes.

Few dishes are more commonly associated with the South of the US than the humble grits. There are variations of thick porridge made from maize-related crops worldwide, but grits are very specific to Southern American states.

Like many Southern dishes, grits were originally a Native American dish that quickly became an American staple after the country was colonised. The preparation for grits has remained relatively consistent from its native American roots, just modernised for quicker production.

Grits are a corn-based product specifically made using cornmeal, the same stuff used to make cornbread.

The corn meal is heated with water or milk for a creamier consistency until they become a thick substance most comparable to oat porridge. Though grits tend to be much smoother than other porridge.

There are some variations of grits depending on the way that the corn is treated. But for the most part, they are yellow or white in colour and are very bland, which is what makes them such a versatile food. With a mild and bland base, grits can be prepared either savoury or sweet.

A common way to cook grits is with butter and sugar, which acts as the ideal porridge replacement at breakfast. Or grits are served as a side dish to accompany various other dishes, especially in Southern restaurants. Shrimp and grits are particularly popular in South Carolina.

How Thick Are Grits?

The thickness of grits varies depending on how much liquid is added to them and how long the grits are cooked. They are supposed to be served quite thick but can be cooked long enough to solidify and be sliced into like bread.

What are Mashed Potatoes?

Some foods have complicated names, warning the average joe away from their preparations. On the other hand, some foods are exactly what they say on the tin, like mashed potatoes.

Obviously, the dish is simply potatoes that have been cooked and then mashed.

The wonderful thing about mashed potatoes is how easily it pairs with a range of dishes, helping to bulk out a meal.

You can add as much milk and butter to the potatoes to make them as creamy as you like. Likewise, you can flavour the potatoes however you wish! Potatoes are one of the most versatile ingredients you could use in a dish anyway.

You can serve mashed potatoes as its own side dish or use them instead of other toppings in certain dishes. Many pies, for example, are better topped with mashed potato than pastry.

Just remember to let the potatoes boil for long enough before you mash them to get the right consistency.

How Long Do You Boil Potatoes to Make Mash?

The softer your boiled potatoes are, the easier they will be to mash by hand and turn into creamy mashed potatoes. So let your potatoes boil for at least 20 minutes to make them as soft as possible.

Similarities Between Grits and Mashed Potatoes

Some foods could never be confused with one another simply because they are so different. But when it comes to grits and mashed potato, there are some clear reasons why they are mistaken for one another:

Differences Between Grits and Mashed Potatoes

Despite having some close and comparable similarities, grits and mashed potatoes are different to their very core. For example:

Grits vs Mashed Potatoes: Which Wins?

If you could only eat one of these two, which would you vote for? It’s time to pick between grits vs mashed potatoes:

Do You Prefer Grits or Mashed Potatoes?

Do you still have questions about what makes grits and mash different? Then have a look over these FAQs:

Can You Substitute Grits for Mash?

Yes, as a side dish, you can usually swap grits and mashed potatoes and vice versa. They both serve the same purpose as a side dish.

What to Serve with Buffalo Chicken