Gremolata vs Chimichurri: What’s the Difference?

Discover the Differences Between Gremolata and Chimichurri 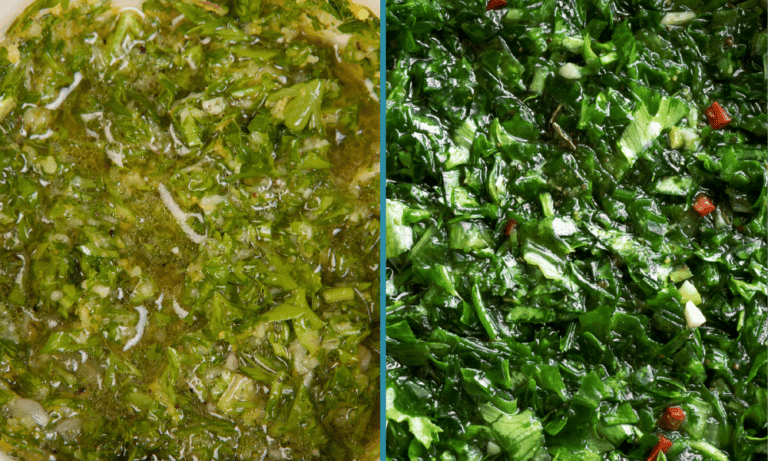 Sauces are some of the most underrated but nevertheless important categories of foods home cooks should familiarise themselves with. We know that seems like an impossible task. After all, every country in the world has their own sauces that are used differently.

Gremolata and chimichurri may not be used often in American or British recipes, but once you expand your cooking range, you will see them everywhere. So, what exactly are the sauces, and how similar are they?

The most noticeable difference between gremolata and chimichurri is their complexity in both preparation and flavour. Gremolata only needs 3 ingredients to be delicious, whereas chimichurri relies on at least 5.

When it comes to quick sauces, few are as quick or easy to make from fresh as gremolata. You may not necessarily see it used in Italian recipes as it is mainly used as a condiment, but you will undoubtedly see it recommended as a serving option in an array of Italian recipes.

All you need to make gremolata is a bunch of fresh parsley, some zingy lemon zest, and some garlic – pressed or chopped.

Such a classic flavour combination is hard to get wrong and is sure to add that little something extra to your dish with very little effort. You only need to dedicate 10 minutes to make a batch of gremolata, and you have an instant flavour booster.

Of course, like all recipes, there are some variations of gremolata, though few overly complicate the sauce, allowing it to remain a simple but effective condiment.

Does Gremolata Use Olive Oil?

Traditional gremolata does not contain olive oil. However, some include it when making the sauce to allow for a smoother, more sauce-like, finish.

Unfortunately, there are not many South American dishes or recipes that gain popularity outside of their country of origin. But luckily, chimichurri has found its way out of Argentina and into recipe books worldwide.

Parsley and garlic are at the heart of any chimichurri recipe, giving the sauce that pungent but earthy impact. The additional use of fresh oregano leaves also exaggerates this earthiness. Then plenty of pepper, red pepper flakes, and vinegar are added to the sauce for a spicy, bitter twist.

Such a complex array of flavours makes chimichurri the perfect condiment to top any simple dish or an array of robust meats such as lamb and steak. Because of the amount of vinegar used in the sauce, chimichurri can be used to help tenderize meat too.

How Do You Use Chimichurri?

Due to the strong acidic profile of chimichurri, it is better used as a marinade sauce to help tenderize meat. But, when used in moderation, it can be used as a similar condiment.

Similarities Between Gremolata and Chimichurri

For two sauces that seem so fundamentally different, there are plenty of ways in which they are similar. Such as:

Differences Between Gremolata and Chimichurri

However, on a few basic levels, gremolata and chimichurri have some noticeable differences that cannot be ignored:

Gremolata vs Chimichurri: Which Wins?

If you had a pot of each gremolata and chimichurri in front of you, which one are you going for? We’re putting them up against each other, so it’s time to cast your vote between gremolata vs chimichurri:

Do You Prefer Gremolata or Chimichurri?

Do you have further questions about how gremolata and chimichurri might be similar (and different)? Then check these out:

Is Salsa Verde the Same as Chimichurri?

Salsa verde is closer to chimichurri than gremolata because it has a liquid element, but salsa verde will not have spice, whereas chimichurri will often have chilli or red pepper flakes.

Can You Use Gremolata Instead of Chimichurri?

Yes, it is possible to use gremolata instead of chimichurri, but you’ll need to add some olive oil to the gremolata to turn it into a wet sauce that can be used for chimichurri.

Can You Eat Kale Raw?

How to Freeze Basil