Discover Common and Unusual Foods That Start With P 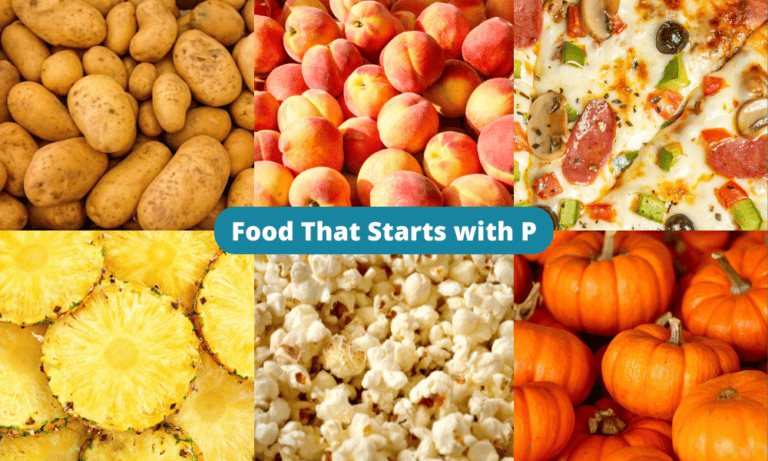 Are you looking for interesting, unique or common foods that start with P? Then check out our extensive list of 24 different food items – some you could think of, some you may not know.

24 Foods that Start with P

Below is our list of 24 different foods, in alphabetical order. Many foods you will know without thinking about it too hard, but a few others might be new to you:

If you’ve never enjoyed a pancake then where have you been?

Whether it’s kept simple with a squeeze of lemon and a sprinkle of sugar, covered in maple syrup or topped with blueberries, strawberries and melted chocolate – pancakes are delicious!

The good news continues as you’ve probably got the ingredients to make pancakes in your kitchen: Eggs, flour and milk. Here’s an easy recipe to knock a batch together.

Papaya might not be something you’ve bought or even tasted before. With it being a tropical fruit from Central America although they are now grown in India, Brazil, Indonesia and Nigeria.

Eating papaya is easy. It just needs to be cut down the centre before the seeds are scooped out and the flesh removed. It can be eaten on its own, as part of a fruit salad or even used in a salsa.

Parsnips are an essential winter vegetable, roasted in the oven with plenty of honey and served alongside a Sunday roast.

If you’ve never tried parsnips before, thinking they’re just a white carrot, you couldn’t be further from the truth. Parsnips possess an incredible earthy sweetness that is uncommon in most vegetables.

This is the first blanket term that’s included on our list. Pasta covers a huge array of shapes, sizes, colours.

Italy, of course, is known to consume the most pasta per capita. But the countries that follow Italy may surprise you. Tunisia, Venezuela, Greece and Switzerland round out the top 5 countries.

Which Types of Pasta Start with P?

Several pasta varieties begin with the letter P. These include penne, pappardelle, perciatelli and pici.

Like many stoned fruits, peaches are hugely versatile. You can eat them raw, roast them in half with a drizzle of honey, turn them into a crumble or add them to a mixed fruit salad.

They’re one of the oldest foods on this list. Records show that peaches are more than 8,000 years old!

The nut that isn’t really a nut, peanuts are an obvious choice to include on a list of foods that start with P. They’re the go-to snack in bars and, when coated in plenty of salt, are incredibly moorish.

Even those who claim to hate vegetables would struggle to turn down a side if peas. Bright green and packed with natural sweetness, peas are one of the most popular vegetables across the globe.

It’s safe to say that Brits love them! In a single year, they grow approximately 35,000 hectares of peas.

Yes, petit pois are a type of pea. Petit is the French word for small. Petit pois are simply small peas. They tend to have a more concentrated sweetness and lack any dry texture you can get from larger peas.

Although sometimes associated with Italian cuisine, this is false. It was actually invented in America by Italiam immigrants.

Americans have certainly taken to consuming the most pepperoni. They are reported to consume a staggering 340,000kg of pepperoni… Per day!

Although they appear to come in different colours, all these peppers are the same thing at different ripeness stages. A green pepper is a young pepper and a red pepper is an older pepper.

Something you may not be aware of is that the older the pepper, the more vitamin C it contains. A red pepper will contain around twice the amount of vitamin C compared to a green pepper.

Pickles are an essential way to provide respite in rich foods and to cut through fatty meats. You can find pickles in burgers and served alongside rich stews.

But pickles are also popular across the globe. The Japanese produce pickles, called Tsukemono, unlike those seen in the West. They are crunchy and subtle.

Pie is, of course, a blanket term for anything encased or contained in pastry. You can get savory pies and sweet pies. You can find traditional pies from countries in all corners of the globe.

In fact, the list of pies across the world is so extensive that Wikipedia has a page dedicated to them!

Pineapple is a tropical fruit that brings an instant ray of sunshine into your kitchen. This is why it shouldn’t come as a surprise to learn that Hawaii products around a third of all pineapples consumed in the world.

Pistachios are quite a posh nut. They certainly wouldn’t be included in a bag of mixed nuts. But that certainly hasn’t impacted their popularity. They’re a welcome addition in dishes across the world from Iran to Italy.

Pizza is another blanket terms that’s been included on this list of 24 foods that start with P… And for good reason! It’s one of the most loved dishes across the globe, from artisan wood-fired sourdough pizzas through to Papa Johns.

The big question is: Pineapple on a pizza – yay or nay?

Whether it’s a larger baseball sized plum or a smaller golf ball sized variety, plums are another popular stoned fruit that makes its way onto this list of 24 foods.

China produces the most plums, by far. They produce over 5 times more plums than the entire European union!

Also referred to as grits in other parts of the world, polenta is corn ground into a coarse texture. It can then be used to make cakes and biscuits or turned into the base for ragu and sauces.

You might not realise it, but technically, a pomegranate is a berry. But that’s Botanics for you! According to Kew, bananas are a berry, but strawberries are not…

You can only eat the seeds inside a pomegranate (also could arils) and they provide a pop of sour sweetness to both sweet and savoury dishes, especially those from the Middle East.

Of all the foods on this list, pomelo is likely to be the one you know the least about. It is a citrus fruit closely related to grapefruits. All parts of pomelo can be eaten, including the peel, which is often used in marmalades.

Gone are the days when popcorn only came in salt or sweet. Now, you can get chocolate-coated popcorn, cheddar cheese popcorn and even Marmite popcorn!

Pork is the only meat that appears on this list of 24 foods. It certainly deserves a mention – even if only for sausages and bacon! Globally, pork is the most consumed meat, although this differs drastically by country.

If you could only eat one food for the rest of your life, then, chances are, potatoes would be in the top 3 options. The versatility of potatoes means they often appear on your dinner plate.

Nowadays, pretzels are a pretty generic thing. But they have quite a history. They are a sign of good luck due to their religious ties. They were part of wedding ceremonies around 500 years ago in Switzerland. And they used to be hard!

Technically, prunes have already appeared on this list of 24 foods beginning with P… That’s because prunes are simply dried plums.

Plums are dehydrated until they shrivel up. Removing the moisture drastically extends their shelf life to around 6 months.

Pumpkin might be associated with Jack O Lanterns during Halloween but that doesn’t mean pumpkin isn’t a delicious ingredient in its own right.

Limeade vs Lemonade: What’s the Difference?

What to Serve with Panzanella

How to Freeze Okra