Fajita vs Quesadilla: What’s the Difference?

We Reveal the Similarities and Differences Between Fajita and Quesadilla 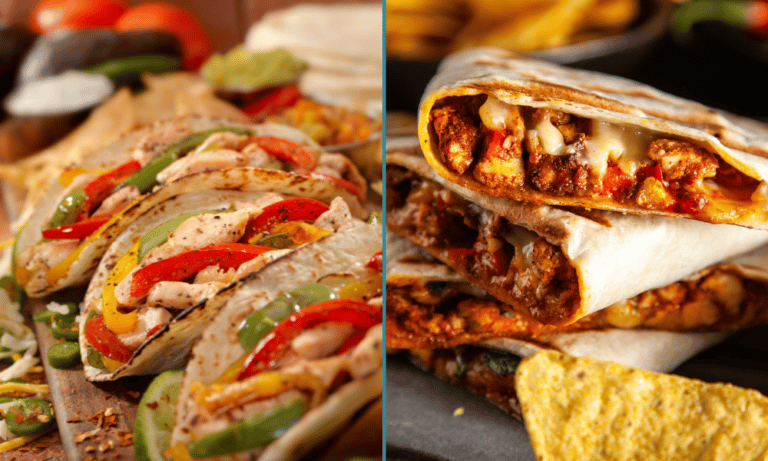 You might think that fajita and quesadilla can be used relatively interchangeably, but this is not the case. Although they have some similarities, fajitas and quesadillas are different dishes.

The main difference between a fajita and a quesadilla is that a fajita is a Tex-Mex dish, whereas a quesadilla is authentically Mexican. Quesadillas are also far more cheesy than a fajita which may have a cheese topping.

What is a Fajita?

To fully compare fajitas and quesadillas, it’s a good idea to know what each of these dishes are. So, let’s begin by taking a look at fajitas. Fajitas originate from Texas and are part of Tex-Mex cuisine. They are not traditional in Mexico.

They comprise sizzling strips of grilled meat, often steak or chicken, alongside sliced peppers and onions – all cooked on a grill or a frying pan. They are then served in flour (or sometimes corn) tortillas.

What is a Fajita Quesadilla?

A fajita quesadilla is a mash-up of fajita contents and quesadilla cooking techniques. You take a tortilla, fill it with your usual fajita fillings, and then load it up with cheese and bake to melt the cheese. It is far from authentic but certainly delicious.

Where Did Fajitas Originate?

Fajitas might be associated with Mexican cuisine, but it is believed that they originated in Texas, where Mexican ranch workers created a fajita from the cheap cuts of meat they were often paid in.

What is a Quesadilla?

A quesadilla is an authentic Mexican dish. It is a corn tortilla filled mainly with cheese alongside vegetables or sliced meats. The filled tortilla is then fried on a griddle or stove until the cheese melts.

The melted cheese almost glues the two sides of the corn tortilla together so that it can be picked up and eaten easily.

What Does Quesadilla Mean?

Quesadilla directly translates as cheesy-dude. The Quesa part means cheese and the Dilla part means dude. This is fitting because the main flavour in any quesadilla should be cheese.

Differences Between Fajita and Quesadilla

There are some fairly obvious and substantial differences between fajitas and quesadillas:

Similarities Between Fajita and Quesadilla

You might not think there is anything left to be similar between fajitas and quesadillas, but there are still a couple of links between the two dishes:

Fajita vs Quesadilla: Which Wins?

It comes down to whether you want something cheesy and authentic versus something easy to eat that’s part of the Tex-Mex cuisine.

Do You Prefer Fajitas or Quesadillas?

If you’ve got further questions about fajitas and quesadillas and how they might be the same and different, then these FAQs might help you out:

Are Fajitas and Tacos the Same?

No, fajitas and tacos are not the same things. Fajitas are larger and filled with grilled or fried ingredients. Tacos are smaller corn tortillas filled with a mix of grilled and fresh ingredients, including lettuce and corn salsa.

Can You Use Fajita Seasoning on Quesadillas?

What Sort of Tortilla Should You Use for Fajitas and Quesadillas?

Ultimately, any tortilla can be used for fajitas and quesadillas. However, you’ll usually find that a flour tortilla is used for a fajita (these are more accessible and cheaper in US stores). Corn tortillas are more commonly used for quesadillas (and are more abundant in Mexico).

How to Freeze Pico De Gallo