Ciabatta vs Focaccia: What’s the Difference?

We Reveal the Similarities and Differences Between Ciabatta and Focaccia 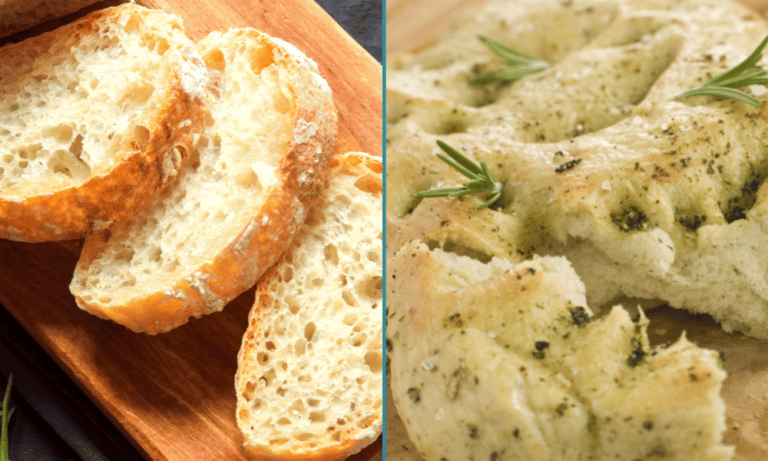 The main difference between ciabatta and focaccia is the texture. Focaccia is softer and lighter, but ciabatta has more of a crust on the outside with a chewier internal texture. Other differences include the flavour, ingredients and age.

Ciabatta is an Italian white bread loaf made from the usual bread ingredients (flour, water and yeast). It is a fairly new bread in the world, having been invented in the early 1980s in Veneto.

It was invented to combat the rising favour of French baguettes. Italians are particularly proud of their cuisine, so they wanted to do what they could to stop French cuisine from encroaching.

What Does Ciabatta Mean?

Ciabatta literally means Slipper In Italian. Ciabatta is named after a slipper because of its long, flat and elongated shape, which resembles the shape of a slipper.

When Was Ciabatta Invented?

You might assume that most bread recipes have been around for 100s of years. But, this is not the case for ciabatta. It was actually invented in 1982.

Focaccia is often regarded as being similar to pizza as it is a flat-leavened baked bread. It can come in various forms and shapes, from round and topped with tomatoes to square and dotted with garlic and rosemary.

Like ciabatta, it contains the usual bread ingredients with the essential additional of olive oil in the dough. This gives it the texture that people love so much. Focaccia is often adorned with toppings. These can be kept simple, such as black olive, or can be more complex such as marinated peppers and anchovies.

What Does Focaccia Mean?

The word focaccia comes from Panis Focacius, Latin for Hearth Bread. This is because focaccia used to be baked in coals during the Roman empire.

Differences Between Ciabatta and Focaccia

Although they are both breads from Italy, the list of differences is extensive. Here are the main differences between ciabatta and focaccia:

Similarities Between Ciabatta and Focaccia

Although the list of differences is quite extensive, there are some similarities between ciabatta and focaccia:

Ciabatta vs Focaccia: Which Wins?

There might be differences and similarities between these two bread types, but which is your favourite?

Do You Prefer Ciabatta or Foccacia?

Do you still have questions about how ciabatta and focaccia are similar and different? Perhaps these FAQs will help you out:

Is Focaccia Softer than Ciabatta?

Yes, generally, focaccia is softer than ciabatta. Although soft in the centre, ciabatta tends to have a crunchier crust and more of a chew.

What Bread is Similar to Focaccia?

The most similar bread to focaccia is Pizza Bianco. This is a pizza without a tomato sauce base. Unlike focaccia, Pizza Bianco is not usually enriched with olive oil, so the texture will be less moist and chewier.

No, focaccia is not pizza. They share some similarities, but focaccia tends to have more of a rise with more air pockets in the dough. Focaccia is rarely served with a tomato base, either. Instead, it simply has a few toppings – if any.

How to Microwave Garlic Bread

How to Reheat Prawns