Can You Eat Kiwi Skin?

Is Eating Kiwi Skin Enjoyable? Should You Avoid It? 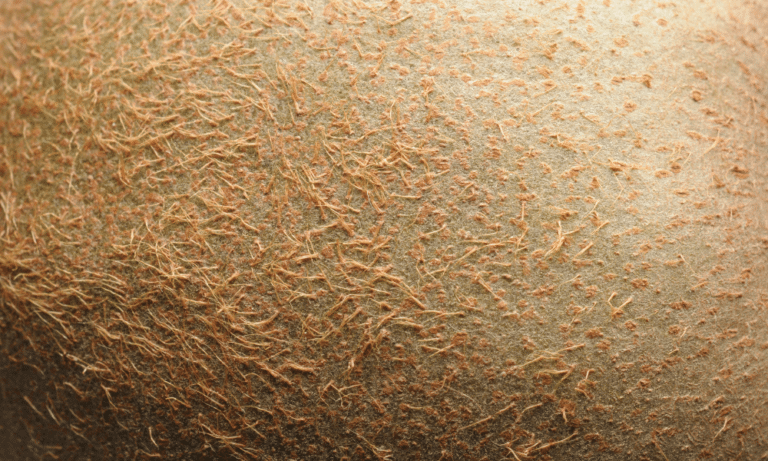 Kiwi is a fantastic fruit to add to any lunch box or to eat as a snack. Its tropical, citrus flavours are both sweet and sharp. That tangy taste is deliciously refreshing at the end of a meal or as part of a tropical smoothie or dessert.

Most people peel their kiwi and ignore the skin but this seems like somewhat of a waste. Wouldn’t it be great if you could find a use for those kiwi skins too? But are they safe and can you eat kiwi skin?

You can eat kiwi skin. Kiwi skin might not seem very appetising, it’s tough, bitter and hairy! But, you can actually eat it and as long as you don’t mind the taste or texture there is no reason not to eat kiwi skin.

If you have ever wondered what kiwi skin tastes like why not take a bite and see? The taste is still reminiscent of the kiwi flavour we know and love but it is much milder in that flavour.

Instead, you get a subtle kiwi flavour with some added bitterness. It has even been likened to eating an apple skin just a little more tough in texture.

The biggest hurdle to overcome if you want to munch on some kiwi skin is the texture rather than the taste. That fuzz that covers the skin can be a little difficult to get used to and the skin is very tough and it might take a while to chew through it.

How to Eat Kiwi Skin

There may not seem like a lot of ways to use kiwi skin but you couldn’t be more wrong! There are plenty of ways you can use it as a snack, in your foods or as an added nutrient-dense bonus to your recipes. Here are a few for you to try:

The first way to eat kiwi skin is perhaps the most obvious. Give the whole kiwi fruit a wash under running water, pat dry and then bite into it in the same way you would an apple or a pear.

If the hairy fuzz bothers you then you can give the fruit a good scrub while washing it and this should wipe off with a little bit of effort.

If you are making a smoothie then add some extra nutrients by putting a whole kiwi fruit in, skin and all.

The blender should do most of the processing work for you and make it much easier to eat and digest the skin. It will also disguise some of the bitterness and you won’t even notice any of the difficulties with eating kiwi skin.

If you do decide to place a whole kiwi into a blender then ensure you use a good-quality, high-powdered blender. A cheap blender is likely to burn out as it tries to break down the tough kiwi skin.

Once you have washed your kiwi you can chop it into slices without removing the skin first. This cuts down the peel you have to get through per bite of kiwi and makes it much easier to eat either on its own as a snack.

It also makes it easier to pop into other meals. You can add a few slices to a salad for a zesty treat or pop slices into a fruit salad for a delicious dessert with some extra nutrition.

If you simply can’t stomach eating kiwi fruit with the skin on then don’t waste that peel, there is one more thing you can try for a crispy, tasty snack.

Pop the peels onto a baking tray and drizzle with a little oil. Add a pinch of salt sprinkled over the peels and pop into the oven to bake for about five to ten minutes or until the skins are crispy. These make a great healthy alternative to crisps.

The flesh of the kiwi fruit is high in vitamins and antioxidants, in particular, vitamin C and E. The skin is also very high in these.

In many cases, the skin of fruits is actually much higher in vitamins and minerals than the fruit itself! This is because this is the part of the fruit that is directly hit by the sunlight which is important to its growth.

So eat those skins if you want an extra dose of vitamins, minerals and nutrients.

Should You Eat Kiwi Skin?

If you can chew and stomach the taste then there is absolutely no reason not to eat kiwi skin. It’s good for you and once you get used to the bitterness is tasty too!

We would recommend that you chew the skin well as it is so tough and it could be a little difficult for some people to digest.

If you’ve got other specific questions about eating kiwi skin then these might help:

Are You Supposed to Eat Kiwi Skin?

Is Eating the Skin of Kiwi Good For You?

Of course! Kiwi skin is packed full of goodness and nutrients much like the flesh of kiwi. This is why eating kiwi skin is actually good for you.

Can You Eat the Whole Kiwi?

Yes, you can eat every part of a kiwi including the skin and the seeds in the centre. You may find the skin a little tough and the central core a little hard but it’s all safe to eat.

What is the Best Way to Remove Kiwi Skin?

If you want to remove the skin from a kiwi then you can either do so carefully with a knife or you can simply use a spoon to scoop the kiwi from inside, using the skin as a make-shift bowl.