Can You Eat Goldfish?

Is Eating Goldfish Safe? Is It Moral? 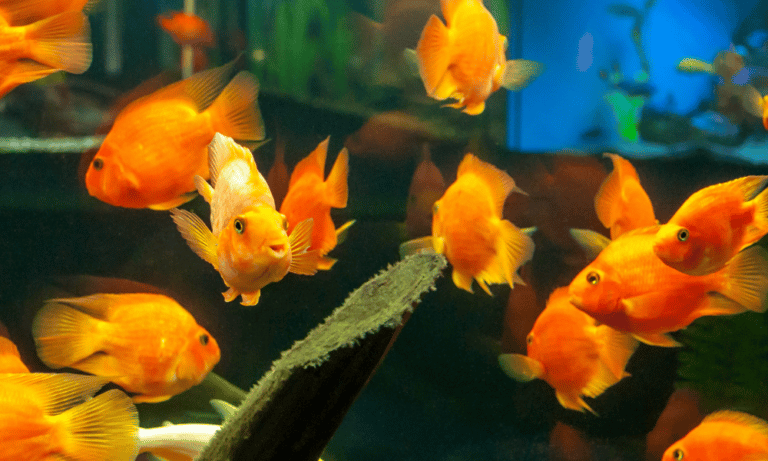 Have you ever looked at your pet goldfish and wondered to yourself, can you eat goldfish? Well, you wouldn’t be alone in wondering why we don’t eat this tiny and often very pretty fish! It seems logical, we eat plenty of types of fish and if you like fish then why not try a goldfish or too?

You can eat goldfish. Like many other types of fish, they are edible. The problem is that you probably don’t want to. They aren’t a great food source and are not worth the effort.

One of the problems with eating goldfish is that it just isn’t very tasty so why would you want to eat the family pets?

As with many types of creatures, goldfish taste very much like the food they eat and it is almost certain your goldfish has had an exclusive diet of those fish flakes or pellets you buy in pet shops.

Take a sniff of the jar that comes in. The smell of that food is essentially what your goldfish will taste like. Not pleasant!

The consumption of goldfish is rare and not something that you see in any cultures around the world when you consider the traditional goldfish you picture as being a vet.

However, the Chinese do eat a fish called jì yú which is from the same family as the goldfish you’re used to seeing. It doesn’t have the same appearance, however. But this does mean it could be said that goldfish is sometimes eaten in China.

If you could get over the taste of the goldfish you might be wondering if it’s worth it for the benefits you get from eating fish?

Unfortunately, even this isn’t the case.

There isn’t very much meat on the fish and there are a lot of tiny bones to catch in your throat. It would be unlikely to fill you up, it would offer very minimal nutritional benefit and it doesn’t even taste good!

It’s fairly clear to see that there really is no reason to start eating goldfish.

If you ensure your goldfish was well cooked then it would be unlikely to cause you any harm. However, if you tried to eat it raw then you may find that you get sick.

Goldfish are most commonly found in indoor aquariums and these can host all sorts of nasty bacteria and infections. If you eat an infected goldfish all the parasites, bacteria, infections and mycobacterial diseases would pass straight onto you.

You can’t even tell which of your fish might be carrying something nasty as some of the diseases they suffer from can lay dormant within goldfish carriers.

Cases of people getting ill from eating goldfish or even handling their goldfish might be rare, but it just isn’t worth the risk.

Should You Eat Goldfish?

Every now and then the trend of swallowing goldfish whole and live seems to surface and this is a bad idea on many levels.

To start with we have already talked about how eating raw goldfish may end up with you being ill. On top of this, swallowing a goldfish whole like this is inhumane at best. So no, you should never encourage this practice.

How about if you fancy cooking a bit of goldfish as part of a meal? Should you eat goldfish then? We would say the answer is still a resounding no.

Goldfish are not sold in a place where you could be sure that all food safety practices are being followed. After all, you are most likely to buy your goldfish from a pet shop!

These are not bred or kept in a way that we would consider safe for human consumption. Even if you did cook and eat your goldfish it would take far too much prep to get the bones out of the fish and you would be left with a very tiny amount of fish to eat that doesn’t even taste good!

Why would you want to even try and eat goldfish when it isn’t worth the effort?

If you’ve got other specific questions about eating goldfish then these might help:

Can You Eat Wild Goldfish?

Yes, you can eat wild goldfish if there’s really no other choice of food. When people think of goldfish, they think of pet goldfish. But, like most pets, goldfish can also be found in the wild.

Can You Get Sick From Eating Goldfish?

Yes, you can get sick from eating goldfish which is why it’s something we’d recommend avoiding. Goldfish can be carriers of mycobacteria that can make you ill.