We Reveal the Similarities and Differences Between Burrito and Enchilada Sauce 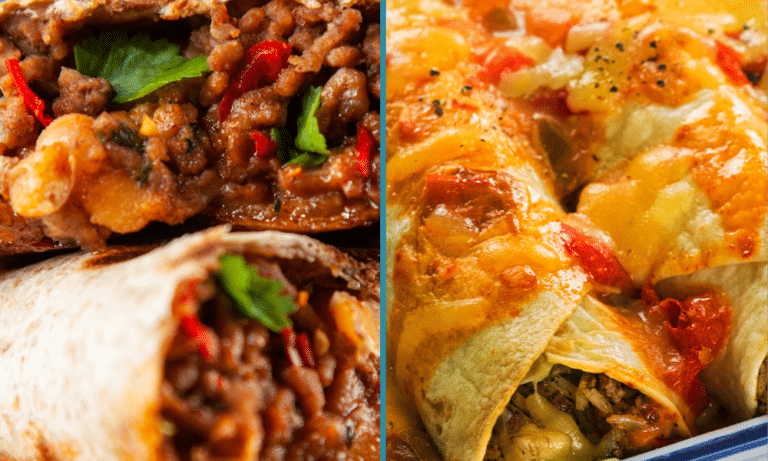 When you are not used to cooking a certain cuisine, it can be easy to get confused as to which dishes pair with which sauces and what each sauce does. Of course, the internet is a wonderful place to help solve this confusion, but it cannot always give a definite answer.

Burrito sauce and enchilada sauce are two of Mexico’s most popular and well-loved sauces, only increasing in popularity as the taste of Mexico successfully spreads throughout the world. But there is still some confusion as to how the two sauces differ, or if they differ at all.

The most impactful difference between burrito sauce and enchilada sauce is their flavours. Burrito sauce, while not overly sweet, is very creamy and has a sweet kick. Enchilada sauce is much more complex with a rich warmth both in a hearty and spicy sense.

What is Burrito Sauce?

Not everyone is as familiar with burrito sauce as they are with the delicious burritos themselves. This is because burrito sauce is not a necessary component of making burritos. However, it is one of those sauces that can make an already wonderful dish that little bit more special.

Burrito sauce can be used either in the burrito or as a dipping condiment. Either way, it has to be thin enough to not mess with the texture of the burrito and its fillings, which is why burrito sauce tends to be creamy and smooth.

The creaminess of the sauce is due to the use of both sour cream and yoghurt.

A mix of oregano and cumin are also used in the sauce to give it a hearty warmth. Although, the main flavour of any good burrito sauce is a slightly heated kick from chipotle peppers and a fresh sweetness from lime juice.

Can You Substitute Sour Cream for Other Creams in Burritos?

If you are not a fan of sour cream, your burrito sauce still needs that extra level of creaminess to work with your burrito, so use mayonnaise instead. Other types of cream will make your sauce too sweet.

What is Enchilada Sauce?

Simply put, there is no enchilada dish without enchilada sauce. You’d just be making regular tortilla wraps. Enchilada sauce can be prepared fresh or ahead of time to smother all over your constructed enchilada tortillas before the dish is cooked, allowing the tortillas to absorb the delicious flavour of the sauce.

Enchilada sauce is built upon a tomato base which develops a savoury richness while the sauce cooks. Dried herbs and spices, such as cumin, garlic powder, and oregano, are sautéed and added to the tomatoes which gives the sauce a complex flavour.

Like any good Mexican sauce, enchilada sauce does traditionally include some chili powder for some added spice. However, you do not have to include the chili powder if you are sensitive to heat.

Similarities Between Burrito and Enchilada Sauce

Since both sauces have a Mexican origin are used in similar dishes, it makes sense that there are some obvious similarities between the sauces:

Differences Between Burrito and Enchilada Sauce

As their names would suggest, burrito sauce and enchilada sauce are not the same sauces. They have their differences which should be noted. Such as:

Do You Prefer Burrito or Enchilada Sauce?

Do you still have queries about burrito and enchilada sauces? Then have a look at these FAQs:

Are Burritos the Same as Enchiladas?

No, burritos and enchiladas have one main difference. Enchiladas are filled, placed into a dish, covered in sauce and then baked. Burritos, however, are not baked and are served filled with cooked fillings.

How to Reheat Tamales

How to Freeze Tamales

How to Freeze Guacamole