Bovril vs Marmite: What’s the Difference?

They're Both Yeasty, Sticky and Deep Brown But Are They the Same? 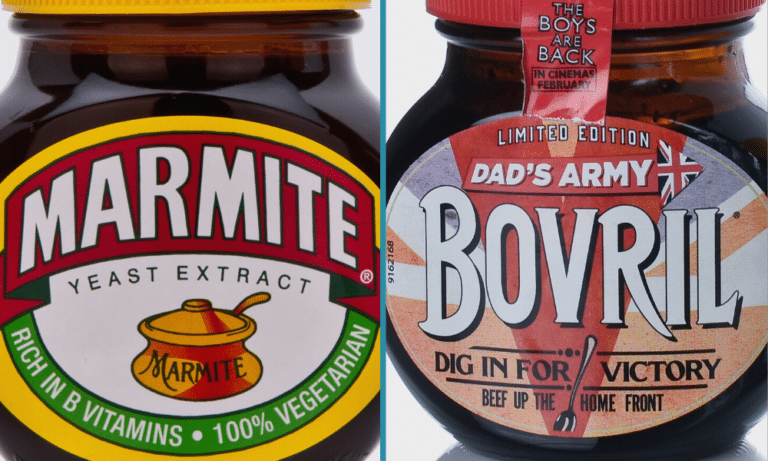 Love them or hate them, Bovril and Marmite have been some of Britain’s most popular spreads for decades. They have developed quite the reputation as a controversial pantry staple. That said, some people can stomach Marmite much more than Bovril, while others cannot stand Bovril but would enjoy a Marmite sandwich.

What makes these controversial spreads so different from others? And is there really much of a difference between Bovril and Marmite in the first place?

The most significant difference between Bovril and Marmite is the base ingredients used to make the spreads. Bovril relies primarily on beef extract and a little on yeast extract, while Marmite is almost entirely made of yeast extract and very little else.

Bovril has a vibrant history dating back to the 1870s when a Scotsman, named John Lawson Johnston, needed to make beef last a journey across thousands of miles and still be as nutritious. So, using beef extract made from cattle carcasses and added protein, Bovril was invented.

Since its invention, Bovril has remained a symbol of strength in Britain.

As well as beef extract, Bovril also contains yeast extract and an array of flavourings paired with salt. Despite its strong smell reminiscent of dark chocolate, Bovril tastes like salty dried beef. There is a hint of sweetness, but for the most part, it is a very savoury spread.

Though Bovril is a thick paste, it is more similar to honey than it is peanut butter which makes it very easy to spread. However, Bovril is more commonly used as a replacement for instant beef stock.

As a large part of Bovril’s production is heavily reliant on beef extract, no Bovril is not safe for vegans. However, Bovril manufacturers have developed several Bovril products. Their most recent is a vegan-friendly Bovril made using a base of beetroot.

Though it is a widely used spread in the UK, Marmite was actually invented by a German scientist in 1902 who just so happened to be in the UK when he invented it.

Justus von Liebig wanted to use the yeast left over from brewing beer instead of letting go to waste. So he turned it into a concentrated paste and bottled it up.

Though intended to be used as a spread, Marmite has been used throughout history for medical reasons. For example, the folic acid in Marmite meant that scientists could cure cases of anaemia way back in the 1930s simply because of the natural goodness in the spread.

These nutrients come from the brewer’s yeast extract, salt, and a range of spices used to make the yeast extract more palatable.

There are very few ways to describe the taste of Marmite as it is so unique, but it is safe to say that the spread has a potent flavour. You do not need to add a lot to your toast or sandwich to taste its complex umami-ness. The spread is also very salty, which enhances that umami taste.

Because of the complex umami taste of Marmite, it works great as a flavour booster in soups, stews, and any other dish that could benefit from the salty balance.

Is Marmite the Same as Vegemite?

Though Marmite is safe for vegans, vegemite is made using a combination of yeast and vegetables, whereas Marmite relies mainly on yeast. As such, Marmite is slightly sweeter and less bitter, whereas vegemite is darker in colour and has an odd meaty taste.

Similarities Between Bovril and Marmite

Many people who love Marmite also are big fans of Bovril and vice versa. This is because of the number of similarities that they share. Such as:

Differences Between Bovril and Marmite

Many people who despise the taste of either Bovril or Marmite may argue that they are one and the same. However, we can confirm that there are some essential differences to note between the two spreads:

Bovril vs Marmite: Which Wins?

It’s time to make a decision. You’re left with a choice and you can only consume one of these two sticky spreads for the rest of your life. Which are you voting for? It’s Bovril vs Marmite:

Do You Prefer Bovril or Marmite?

Do you still have questions about Bovril, Marmite and where they differ? Then have a look over these FAQs:

Can You Substitute Bovril for Marmite?

Yes, these two spreads can be used interchangeably but remember that only one is vegetarian. So, if the dish you’re serving is meant to be vegetarian then Bovril will not work.

How to Microwave Sausage Rolls