What are the Best Tomatoes for Sauce? 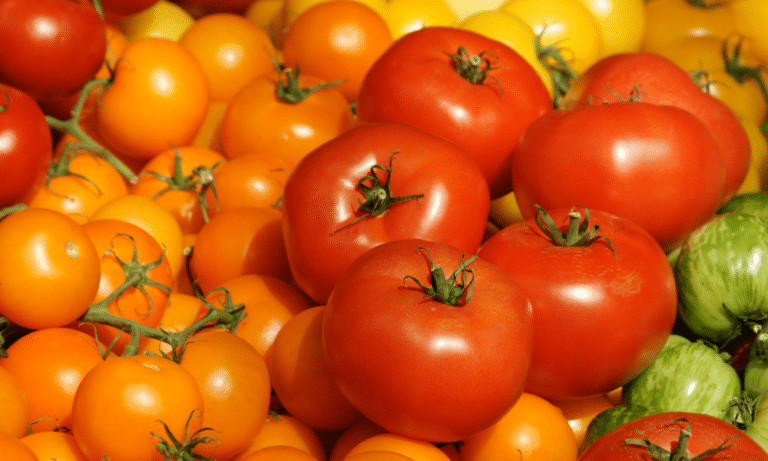 When making homemade tomato sauce, you probably know that the type of tomatoes you use will have a significant impact on the final sauce. From the classic Italian San Marzano to the flavorful and meaty Roma, there are various tomatoes you could opt for. But how do you know which ones are the best?

One of the best tomato varieties you can use for making a sauce is Roma tomatoes. They have a good balance of acidity, sweetness and firmness without being too expensive.

What Makes a Good Tomato for Sauce?

When looking for the best tomatoes for making sauce, there are a few things to consider.

First, you want to pick tomatoes that are flavorful, with a balance of sweet and acidic notes. Tomatoes that are too sweet or too acidic won’t make for a good sauce. You need balance.

You also want to look for tomatoes that are firm and meaty, as they will hold their shape better during the cooking process. This is less of an issue if you’re making a smooth sauce, as you’ll cook them down for longer, allowing them to break down.

And finally, you want to look for tomatoes that are high in juice content, as this will create a rich and velvety sauce without needing to add another liquid.

Now that you know what to look for in a good tomato, let’s take a look at some of the best tomato varieties for making a sauce:

Heirloom tomatoes are a type of tomato that has been around for generations and can be found in a variety of colours, shapes, and sizes.

Heirloom tomatoes are known for their intense flavour and sweetness, making them an excellent choice for a sauce. When making a sauce with heirloom tomatoes, it’s best to use a combination of different shapes, sizes and colours to create a complex flavour.

Heirloom tomatoes can be used in any type of sauce, from a simple marinara to a more complex arrabbiata or puttanesca sauce.

Roast Them for More Flavour

Heirloom tomatoes can also be roasted before adding them to the sauce to bring out their sweetness and intensify that tomato flavour.

To roast heirloom tomatoes for sauce, place them on a baking sheet and drizzle with olive oil. Roast in a preheated oven for about 15 minutes or until the tomatoes are lightly browned and softened.

Roma tomatoes are a type of plum tomato that is meaty in texture with a low water content. This makes them ideal for sauces as they won’t break down too quickly and can hold their shape during the cooking process.

Roma tomatoes are also relatively sweet, making them a good choice for making a sweeter sauce.

When selecting Roma tomatoes for sauce, look for tomatoes that are firm and have a deep red colour.

When prepping Roma tomatoes for sauce, you should only need to slice them in half as they’re relatively small.

The skins aren’t usually too thick, so they can be left on. However, if you’re after a silky smooth sauce then it can still be worth removing them, even if it is a little time-consuming.

San Marzano tomatoes are an iconic Italian tomato known for their sweet flavour and thick flesh. This means they will release plenty of tomato-rich flavour before they’ve had a chance to break down entirely.

San Marzano tomatoes can actually be left whole to produce a robust, rich tomato sauce. The downside to this is that the sauce takes hours to cook fully. If you’re pushed for time, dice them up and cook them down over a low heat.

The skins of San Marzano can be pretty tough. When it comes to eating the sauce, you’ll end up with tough and stringy bits of skin that are pretty unpleasant to eat. Instead, give them a quick blanch, then peel the skins off before cooking your sauce.

Cherry tomatoes are a type of small, round tomato that is known for its sweet flavour and juicy texture. This makes them an excellent choice for sauces that require a burst of flavour and sweetness.

Because cherry tomatoes are so small, they tend to have a far more concentrated sweetness to them. If you don’t want an overly sweet sauce then opt for a large variety of tomatoes, such as heirlooms.

The other benefit of cherry tomatoes is that they are effortless to get hold of. You don’t need to go to a market or specialist food store as you would with some other options on this list. Instead, most supermarkets will stock a decent supply of cherry tomatoes.

Making a fresh tomato sauce is not something you can quickly do during the busy work week. Instead, you need to dedicate a few hours to slowly cooking the tomatoes down to end up with a rich, intense tomato sauce.

The ingredients list is simple but, when simmered, produces one of the most intense tomato sauces you’ll ever have.

Tips for Preparing Tomatoes for Sauce

Once you’ve selected your tomatoes, it’s time to prepare them for sauce. Here are some tips for prepping your tomatoes for the sauce:

If you have further questions about making the best sauce and choosing the right tomatoes for the sauce, then check out these FAQs:

What Tomatoes Do Italians Use for Sauce

Roma tomatoes are one of the most commonly used tomatoes in Italy for their perfect balance of flavour, sweetness and affordability. Having said that, Italians will use whatever tomatoes they have on hand to produce a delicious sauce regardless.

Are Beef Tomatoes Good for Sauce?

Although they are full of juice, their size tends to mean that beef tomatoes have a far milder tomato flavour resulting in a bland sauce. Instead, stick to Roma or cherry tomatoes for a more intense sauce.

How to Reheat Risotto